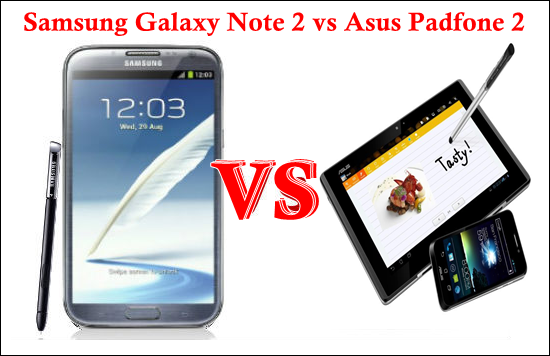 The tech world does take keen interest to get updates on product information of Samsung and Asus as it come. After getting positive reviews about their previous launch, both manufactures has come up with brand new products which will meet face to face in the international market. Expecting record sales with their homemade devices Asus Padfone 2 and Galaxy Note 2, Asus and Samsung aims to keep a lion share on to their side. Both hybrid devices would act as a bridge between tablet and smartphone. So let us experience the heat which both devices are expected to bring in the coming days.

Both devices are designed in such a way that the consumers would fall in love with it in one look. Samsung has taken keen interest to give the Galaxy Note a 'phablet' design which already had kept its fans stunned. On the other hand Asus which has been raved with the production of Transformer tablets do have given key importance to the design of Padfone 2 which can be used both as tablet and also turn into a smartphone too.

The Samsung Galaxy Note 2 touts of having a 5.55-inch Super AMOLED capacitive multitouch display reinforced with Gorilla Glass and sports with 1280 x 720 pixel resolution. The Galaxy Note 2 is supported by an S-Pen which would comfortably respond to touch. While the Asus Padfone 2 has a 4.7 inch Super IPS+ capacitive touch screen display with 1280 x 720 pixel resolution.

Samsung Galaxy Note 2 is equipped with a 1.6GHz Exynos 4412 Quad chipset processor processor with 2GB of dual-channel RAM while the ASUS Padfone 2 boosts of having a 1.5GHz Qualcomm SoC quad core processor.

The best part consumers look forward would the quality of the camera which is equipped in a device. Here Asus Padfone 2 would get a lot of applause for its monstrous 13MP shooter and a 1.2Mega Pixel front camera for video calling. But Samsung Galaxy Note 2 has only a 8 Mega Pixel rear camera and a 1.9MP front camera productive while making video calls and Live conferencing.

On the connectivity front both devices do have similar features like 3G, Wi-Fi 802.11 a/b/g/n, dual-band, Wi-Fi hotspot, Bluetooth v4.0 with A2DP, microUSB and Near-Field Communication (NFC). Battery which is the real life of each product is also a concern for smartphone and tablet users. The Galaxy Note 2 is loaded with a 3,100 mAh Li-ion battery in comparison to Padfone 2 which is power-driven by a 2,140 mAh Li-ion battery. The Galaxy Note 2 which boosts of providing standby time of 890 hours on 3G, could last only for 12 hours while using the phone without any break.

The Samsung Galaxy Note 2 which is currently available in the market is priced around $800+ and Rs 39,990 in India. The official pricing of Asus Padfone had not been unveiled yet, but it is predicted to cost around $1300+ and Rs 64,990 in India. So now, not only the specs and features but the price too depend the future of the sales. But for those who wish to buy products keeping zero eye on the price, then Asus Padfone will bring more smile on your face.

Both Samsung and Asus have come up with products with some exclusive. Galaxy Note 2 is truly a complementary design of its own S3, while some of the S software like S Voice, Direct Call, Smart Stay, S Beam, Pop-Up Play do add more colours to it. With not less, Padfone 2 also comes with a bunch of unique feature making it a lovable device. So it is up to the consumers to choose from the two. While Galaxy Note 2 do come with a larger display, Padfone can be benefited as a smartphone and tablet with outstanding camera performance too.