Overall review of Agent Dash game
What I liked most
I liked the user interface of the game and graphics were superb while playing the game. Game scores a total of 7 out of 10 in my ratings.

Today in the market there are so many runner games available and in the iOS platform is completely filled with these games. One such game which we are going to discuss today is named as the Agent Dash. Agent Dash is primarily a game in which you have to keep on running and not stop at any cost. You will get obstacles in the path and your prime motive is to get away from them without getting battered. So let's find out more about this game in detail and try to see the game from different aspects of playing.

Watch this short video about this game:

There are very few things which can be told if you talk about a game which has been built on a platform on which many other games have already been built. So for instance if I am talking about the game Agent Dash, so it will be better to know other games like Temple Run. In Agent Dash, you character is of an agent and he is on the mission. You are running in the game but not because you are chased by someone but the treason is that you are having mission of destroying the enemy bases. So like every other runner game, you have to do various movement of your body in order to protect yourself from the obstacles coming in the way. Left or right or swipes are some of the movements which you have to do in order to save yourself. So you have to quit active while this game especially on the mobile phones. The control input and the sensitivity of the controls in Agent Dash game is very nice and commendable from side. I mean if you press the button to left the response of the player is quick and there is no lagging in it. 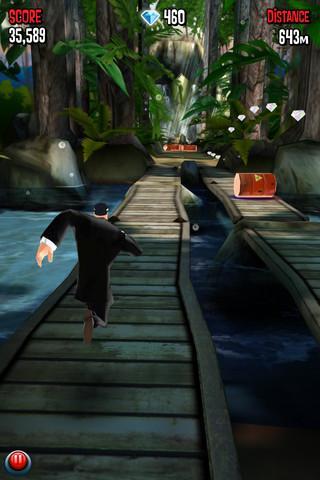 On the way you will be coming across a lot of enemy bases and your prime motive is to destroy them. There are various areas where you will be frustrated but there are some areas where you will say "yes, this is the fun". You will get special boosts time to time. Some boosts will provide you the option of flying, while abother boost give you the power of the attracting the currencies, which are flying on the way. Overall, the game was interesting to play and you will never stop playing.

How is it different from others

Excellent graphics is something that make this app different from many other games in the market. Uniqueness and originality are some of the things which Agent Dash lacks. I mean, you will find most things same as other games of runner type category. However, it has some new and different character to play with and also the music and whole setup is different and interesting. But the whole idea of plotting things together is same as in the other games.

User interface - the big plus
The user interface of Agent Dash is very unique in its play and simple to follow. The menus are very clear and the detailing is good. The graphics which appear on the screen are best in their class and that what made me play this game further.

What can be improved

And don't forget to read our latest Android Games reviews. We are currently looking at some of the upcoming Windows 8 games as well and you can expect some expert reviews very soon.