Pros and cons of Symphony game
What I liked
I liked the simplicity of the game and the concept of music addition is also very good. The difficult of the levels are also added features in this game. So you should be very quick in your play in the difficulty levels.

Where it is lagging
The graphics of the game are very gaudy. The storyline of the game can be made stronger.

Ratings for Symphony game
The game is all right to play with and scores a total of 7 out of 10 in our review.

There is a new game for the PC in the market and the name of the game is Symphony. This game offers you the game with favorite music playing around in the game. The level of gaming and your enemy playing style is dependent on your music tempo. It can be rock version while some of them can be are soft versions. By default it too has some games but you can add your songs too. This game is fun while playing. To learn more about this fun, I have given the whole review of this down the pages. So let's read more about this game in detail.

Storyline and gameplay of Symphony game

How good it would be if you can listen to your favorite song while playing the game? For instance it would be very nice if you're firing heavily on the enemy and the Linkin Park guitar is playing at the background, wouldn't that be amazing. Yes, we have a game which offers all these stuff. Symphony is a nice game to play and reflects all the good stuff which we can have while playing this game. The story of the game is very basic and it starts like this. Your music is in danger from some freak and that freak is trying to destroy your music and now you have to fight this infection to protect your music. And this is how your whole quest for the play starts. I personally feel that if something is very gaudy in its color, I don't like it. Some sort of problem is persistent in this game. I mean the games graphics are clear but they are very gaudy. The extent of this problem is that you sometimes will not be able to see the fires which are done by the opposite enemy. So, a little disappointment here in this part of game and it is very bad. 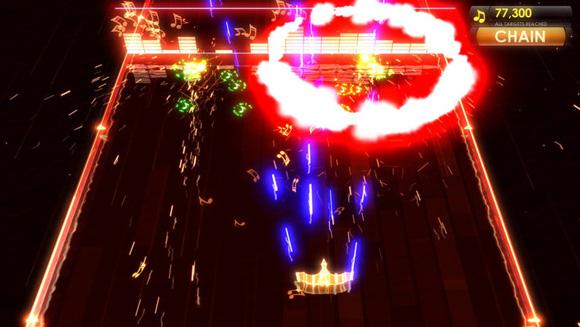 This game is having around five major enemies and you have to kill them. You have infinite life to fight with these guys but the fact remains is that if you get killed you will lose the inspirational level and this inspirational thing is alike a currency in this game. By this you will be repaired and be able to buy the upgrades. So don't let yourself get killed. The enemies and the song changes in every level and the different army in this game are very good. The different level comes with more extent of difficulty. So you have to be very sound and quick in its play.

How Symphony is different from other games

There are some similarities and some difference in this game as compared to other games. Similarities are in the sense that there are other games too which uses the music philosophy but the difference is that nobody has applied this music therapy to galaxy wars. The storyline of the game is interesting, although it is very short.