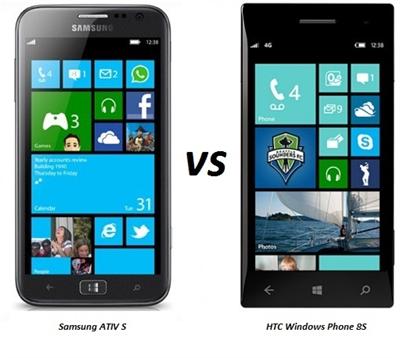 This article will compare both the two phones exhaustively to tell you the best between them. So here we go:

First, let's talk about Samsung Ativ S. It has a Qualcomm Snapdragon S4 Plus MSM8960 chipset which houses a processor of 1500 MHz which is a dual core krait processor. The device also has a separate GPU i.e. Adreno 225. This powerful processor is perfectly complemented by a 1 GB DDR2 RAM.

As far as Samsung Ativ S is concerned, it exhibits an incredible 4.8 inches Super AMOLED capacitive touch screen, which is HD with a resolution of 1280 X 720 pixels and pixel density of 306 PPI. The screen is protected by Corning Gorilla Glass as well to keep it scratch free always. The HTC Windows Phone 8S on the other hand has a 4 inches Super LCD capacitive touch screen with a pixel resolution of 480 X 800 pixels and a pixel density of 233 PPI. It is also safeguarded by the Gorilla Glass display.

There is a whole lot of difference in the cameras of the two devices. Let the Samsung Ativ S go first. The device has a very clear 8 MP camera with auto focus and LED flash. The plus point here is that the camera is capable of recording videos at full HD i.e. 1920 X 1080 pixels (1080 p). The phone also has a 1.9 MP front facing camera to make video calls on a 3G network. 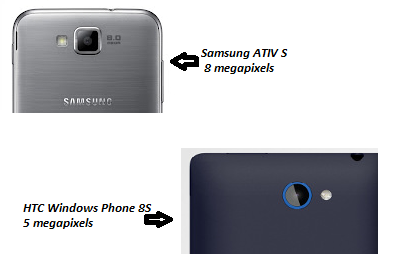 The HTC Windows Phone 8S on the other hand has a very disappointing 5 MP camera only. Where almost all the new phone today, have at least an 8 MP camera, a 5 MP camera feels a little lower on the quality. The camera is equipped with auto focus and LED flash here also. But the camera can record videos at a maximum resolution of 1280 X 720 pixels (720 p) only which is not at par with the Samsung Ativ S. Also there is no option for a front facing camera for supporting video calls. Therefore, with very huge advantages, Samsung Ativ S leads the way here undoubtedly.

The Samsung Ativ S has Bluetooth 3.0, Wi-Fi, Wi-Fi direct, micro USB, NFC, A-GPS with GLONASS and supports both 2G and 3G networks. The HTC Windows Phone 8S on the other hand has Bluetooth 2.0, Wi-Fi, A-GPS with GLONASS, Micro USB and supports both 2G and 3G networks.
If you want to use HTC Windows Phone 8 S, you need to convert your current SIM into a micro SIM by cutting it whereas there is no such problem with Samsung Ativ S.

The Samsung Ativ S comes equipped with a very powerful 2300 mAh standard Li ion battery, which gives you a long on time. The HTC Windows Phone 8S on the other hand has only a 1700 mAh Li polymer battery which is still powerful but stands nowhere near the Samsung Ativ S.

So, there is not much difference here too, although Samsung Ativ S has better features as compared to the HTC Windows Phone 8 S but not much of an advantage here. Therefore, it would have to be considered as a draw here.

The expected price for Samsung Ativ S is expected to be around 30,000 INR, which places it in the list of some of the costly phones in the tech markets. The HTC Windows Phone 8 S is also supposed to be priced around the same i.e. 25,000 to 30,000 INR.

When both the phones will be priced almost similarly, it is very difficult to say which one will be better. But Samsung Ativ S is definitely better than HTC Windows Phone 8S in all respects provided that they are priced similarly. If you need a very powerful phone and you do not care much about the panache factor in the phone, you must definitely go with the Samsung Ativ S.

On the other hand if you are more concerned about the glam factor and will be satisfied even if the phone lacks some extra ordinary features, then the HTC Windows Phone 8 S should be so your choice.