The smartphone market is flooded with new phones almost every day. This revolution has made these smartphones with high end features a lot affordable for the general masses. But, it has also increased the amount of confusion which a buyer has to undergo in order to select the best phone that fits both his requirements and his budget. 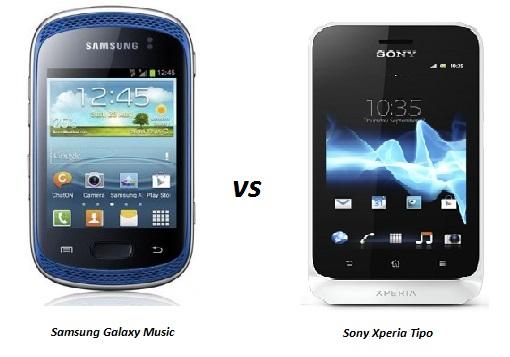 Two of the best smartphones brands viz. Samsung and Sony have recently unveiled its two budget friendly smartphones which are fully packed with features and are expected to compete neck to neck in the tech markets. This article will compare the two recent smartphones viz. Samsung Galaxy Music and Sony Xperia Tipo which are very strong contenders in their segment. So here we go.

The Samsung Galaxy Music measures 110.1 x 59 x 12.25mm whereas the Sony Xperia Tipo measures 103 x 57 x 13mm. As one can see, Tipo has an advantage here that the dimensions are very accurate, just to fit the screen in the board whereas the Galaxy Music is slightly oversized comparatively. So Tipo gets a point here. Tipo has a kind of a subtle but attractive look whereas the Galaxy Music makes the screen look very small comparatively.
The Galaxy Music weighs 106.9 grams whereas Tipo is slightly lighter with 99.4 grams and again has an edge over Galaxy Music.
The Galaxy Music has a 3 inches TFT screen, which has a pixel resolution of 240 X 320 pixels and pixel density of 133 PPI whereas if we talk about XperiaTipo, the resolution is better with 320 X 480 pixels and a pixel density of 180 PPI. So here, also we see that the Sony XperiaTipo has a better screen than the Galaxy Music. Both have a multi touch, capacitive screen that is TFT type, but the Tipo has a scratch resistant glass on its screen and there is no comparison for that in Galaxy Music yet. So here also Tipo gains some extra points.

Comparison of Memory and Processor

As far as Galaxy Music is concerned, there has been no official announcement about the processor but rumors are that the phone will be featuring a 850 MHz, single core Cortex A9 processor with 512 MB of RAM.
Whereas in Tipo we have 800 MHz, single core, ARM Cortex A5 processor and the same amount of RAM.
So, if the rumors are true, Galaxy Music has an edge over here.
The Samsung Galaxy Music has a 4 GB of internal memory and the external is expandable up to 32 GB using a micro SD card. One cannot expect more form a budget phone.In Tipo, we have a 2.5 GB of internal memory, expandable up to 32 GB using the SD card. Considering the size of mobile applications these days, a 2.5 GB of internal storage space seems insufficient. Therefore, again Galaxy Music wins.
Both the devices run on the Android's 4.0.4 Ice Cream Sandwich Operating System that is quite good and efficient. Hopefully, both of them will soon be upgraded to the latest version of Android OS i.e. Android 4.1 Jelly Bean. There were no such performance issues in both the phones considering single core processors. Though both the phones have a customized user interfaces, it must be said that Sony has a better interface than Samsung for sure.

The Galaxy Music has a 3 MP camera with a fixed focus which seems very old fashioned. One would have expected the feature of auto focus at least. On the other hand, Tipo is equipped with a 3.2 MP camera with 4X zoom. There are no secondary cameras in both the devices. So we have Tipo having slightly an edge over the Galaxy Music. But the Galaxy Music can record videos at 800 X 480 p whereas the Tipo supports only 680 X 480 p video recording. So we have a draw here.
Both the devices do not have any type of flash either.

The Galaxy Music comes with a 1300 mAh battery and Tipo has a 1500 mAh standard Li ion battery. Tipo definitely has a better battery than the Galaxy Music. So Tipo gets a point here. However, there is not much difference in the power capacities. Both the phones support 2G and 3G networks, Wi-fi, hotspot tethering and micro USB connectivity. Galaxy Music has a Bluetooth 3.0 whereas Tipo still has Bluetooth 2.0 which feels quite outdated. But Tipo is equipped with A-GPS whereas Galaxy Music has no GPS at all which is very-very disappointing. As the name suggests Galaxy Music is optimized for music and has features like dual stereo speakers, SRS, live sound, smart volume etc. which are missing in Tipo. Tipo has an average music quality as compared to the Galaxy Music. Both the phones have rest all the common features that are expected in a smartphone such as accelerometer, proximity sensor etc. So here also there is a tie between the two.

There has been no official announcement regarding the price of the Galaxy Music but as per the rumors, the price is expected to be around 5500 INR whereas the price of Sony XperiaTipo is about 9000 INR. Therefore, Galaxy Music wins here.

If you are looking for a true budget phone, then you should definitely go for the Samsung Galaxy Music. Though it lacks some features but, considering the price, (if the rumors prove to be true), it is the best deal you can get. Nothing more can be expected in 5500 INR.

But, if you can extend your budget to around 9000, then Sony XperiaTipo will be a good choice because it has certain additional features as compared to Galaxy Music. Also, it certainly feels like a smart phone with a sense of panache. In short, at least it looks good as compared to Galaxy Music which feels very timid sometimes.
But ultimately the final decision will be yours. Both the phones have their own advantages and shortcomings. It is very hard to tell which one is better over the other. You should go for the one that appeals you the most.