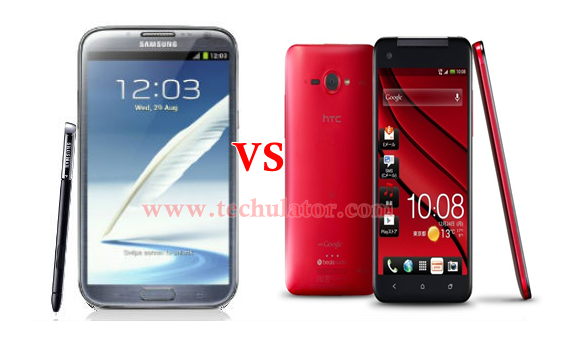 Do you ever have wondered about the quick developments that happen in the field of technology? With new and advanced technological innovations, consumers are able to get closer and closer while pool into the everlasting world of excitement. With the arrival of more and more players in the field, people do experience the real heat which sparks in between the manufacturers.

Samsung Electronics, which had shown their credibility being a strong contender in the international market unveiling a number of gadgets with remarkable features, would rejoice with the success of Samsung Galaxy Series phones which had a wonderful journey around the globe. Samsung Galaxy Note 2 would be one among the younger products unveiled recently. Meanwhile The HTC has uncovered the J Butterfly toughed as world's first smartphone to feature a 1080 pixel display. As this device is pitted against the Galaxy Note 2 we can have a detailed comparison between the two.

Designed and developed by HTC, the J Butterfly was made public on 17th October 2012 at Japan. As like the HTC One X5 or HTC Incredible X do have a global release, the tech enthusiasts believe to get the first touch of it which might come in other name depending upon the fate of the current smartphone.

The Samsung Galaxy Note 2 comes with a huge screen size would be ideal for people with larger hands. The Galaxy Note 2 boosts of having a 5.55 inch HD Super AMOLED S-Stripe RGB screen with 1,280×720 resolution. The 16:9 ratio is capable of delivering widescreen movies even while on the move. Even the HTC J Butterfly might be a dwarf with 5 inch display comparing with Galaxy Note 2, its new Super LCD3 with 440ppi full HD display is truly enough to overtake the former. So here HTC gets an edge over Samsung while thinking about its quality.

The Samsung Galaxy Note which is packed with the Exynos 4412 Quad-core 1.6 GHz Cortex-A9 processor would give quick results. The HTC J Butterfly relay on the new Snapdragon S4 Pro 1.5GHz quad core which is also faster. As both smartphones do possess 2GB RAM, the internal memory would decide the winner. The 16 GB internal memory of the Butterfly will not reach any where comparing with the 64GB internal memory of Galaxy Note 2. But the memory can be boosted with the help of a microSD card. Both the smartphones do run the latest Android 4.1 version Jelly Bean.

Both Smartphones will satisfy its users as both are bundled with better quality cameras with 8 Mega Pixel. The 1.9 MP front facing camera is fair comparing with any smartphones currently available in the market. But as HTC has already proved to have the best cameras for smartphones we can expect that the J butterfly too follow the same making it lovable.

One exciting factor which HTC J Butterfly alone can boost of is that it is 'WATERPROOF". Sorry, Galaxy Note is nowhere in the frame.

Samsung Galaxy Note 2 would be ideal for those who have a passion over the manufacturer. It is also preferable for those who wish to have a bigger screen experience. But the HTC J Butterfly would also be the ideal choice for those looking for a better display.
The Samsung Galaxy Note 2 will be available at $ 800 in USA, € 650 at UK and Rs 38,000 in India. The HTC J Butterfly will be available in Japan by December but the price is not yet revealed.