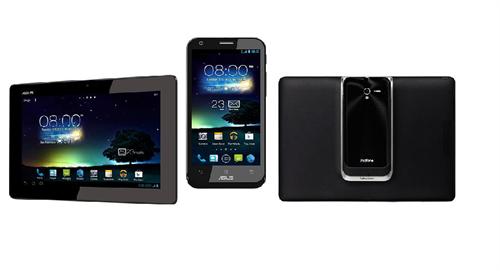 Asus has launched its new Padfone 2 at an event in Taiwan. The device was getting a lot of attention from past few days due its pics leaked on twitter. Asus has launched it officially in the price range of $620 to $720 for the smartphone only. For the entire combo, i.e. smartphone + tablet, you will have to pay an additional $210.

The Padfone will be available with Android 4.0 (Icecream sandwich) version; but Asus is planning a Jelly Bean upgrade in future.
The smartphone features a 13 megapixel rear camera and a 1.2 megapixel front camera. The camera can record 1080p HD videos at 30 fps. It has an LED flash and autofocus feature. Other key specs of the device are given below : The Padfone is quite similar to its previous version. The main differences are in the overall design and build. The cover that was used in the docking bay is removed in the new version. Now, you just need to slide the phone to fit it into the Dock station.

The overall design is sleek and the Padfone looks quite stylish. The Padfone will be available in Black/White colors. It is also lighter than its previous version. The combined weight of the phone and the dock station is merely 649 grams. The smartphone weighs only 135 grams.

The 4.7 inch Super IPS + 720 HD display has superb clarity and brightness. The Corning fit glass covering makes the display stronger and sturdy. To enjoy the larger view, you can use the 10.1 inch tablet which is same as the previous version.

The new Padfone 2 is powered by 1.5 GHz Qualcomm Snapdragon processor that provides a super fast computing experience. It is a quad-core processor and is the main reason behind its super fast speed. Asus claims that it is 30% faster than the previous version of t he Padfone.

The sound quality has also improved from the previous version. Asus has used its Sonic Master audio Technology in its Smartphone to improve the sound quality.

The Padfone 2 will be available in 16 GB, 32 GB and 64 GB variants. The phone also features a 2 GB RAM. Apart from the device's storage, Asus is also providing a 50 GB cloud storage for 2 years with Asus Webstorage.

What is the latest model of Asus Padfone series. The detailed information given in this article is very good.