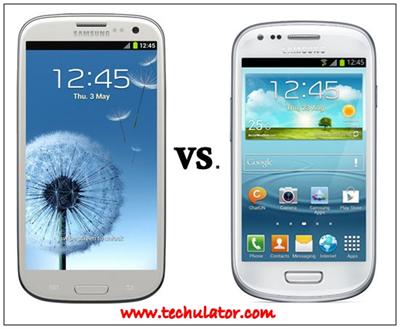 After making a huge buzz in the tech world, Samsung has officially unveiled a new smart phone named 'Galaxy S3 Mini' which was thought be the Apple iPhone 5 killer. After much speculations 'S3 Mini', the new flagship from electronics giant is now up to enthrall the galaxy phone fans. Now it's time going deep to know whether the toughed Galaxy S Mini which claims of being a smaller version packed with all the goodies set for its predecessor, Samsung Galaxy S3 do have the features more than similarity in its skin.

Samsung Galaxy S3 Mini comparing with its big brother is chubbier in look. While the Samsung Galaxy S3 finds 8.9 mm thick, the all new Galaxy S3 Mini is of 9.85 mm thick. But the good factor is that, the S3 Mini is lighter with just only 112 gms comparing with its predecessor which do weigh 133 gms. Even though little bit of puppy fat, S3 Mini is able to build a thick bond with your pocket as it would rest comfortably without any problem. This phone will be ideal for those who feel their hands shaky while handling Galaxy S3 which boost of having 4.8 inch display.

The Samsung galaxy S3 is embedded with a dual-core 1GHz NovaThor U8420 processor compared to the 1.4GHz Exynos 4412 quad-core processor in galaxy S3. The NovaThor processor is ideal for S3 Mini which can be more effectively used for business and gaming platforms. Meanwhile the Galaxy S3 also spot Exynos 4412 is compatible with any other phones in performance.

The Galaxy S3 Mini which runs on Android 4.1.1 Jelly Bean and have the Samsung TouchWiz UI smeared on top. But the Galaxy S3 is powered with a 1.4GHz Exynos 4412 quad-core processor and currently runs Android 4.0 Ice Cream Sandwich. But the latest Android 4.1 Jelly Bean update has already started in few countries.

Samsung has always taken a step forward to give the best hardware settings for all of its models. Samsung Galaxy S3 Mini and Galaxy S3 are also not exceptions as both phones do come with NFC wireless communications standard and also Wi-Fi/Bluetooth/GPS features along with a microUSB for transferring data.

Samsung Galaxy S3 Mini will not offer any surprise related to its storage ability as it offers only 8/16 GB internal memory while the Galaxy S3 gives comfortably with 16-64 GB internal memory. As both phones offer an external microSD memory card slot, the internal storage capacity will not trouble the users.

Samsung Galaxy S3 Mini has a 5 megapixel camera while its big B boosts of having an 8 megapixel shooter. If you are not an addicted photographer, the 5 Megapixel camera would be ideal. The Galaxy Mini edition can capture video only up to 720p in resolution, but S3 clinch the title while having 1080p video. Expect for browsing, the photos and videos taken from Mini would be match with the performance of S3.

Even though Samsung claims to have the Galaxy S3 mini a miniature version of Galaxy S3, in reality it doesn't seem so. But this phone will be ideal for those who are looking for affordable mid range phones.