Micromax is all set to release their latest tablet which would add one more to their much popular Funbook series which had already created waves across India. After the popularity of Funbook Pro, Funbook Alpha, and Funbook Infinity Micromax will make the tablet market much hotter with Funbook Talk P350 which has line of features which will surely attract its consumers.

Funbook Talk P 350 priced at Rs 7,249 will be the best for those who want to use GPRS service. The dual band GSM radio allows its clienst to make voice calls. The tablet lets you stay connected even while on the move where the signals of Wi-Fi are not available. 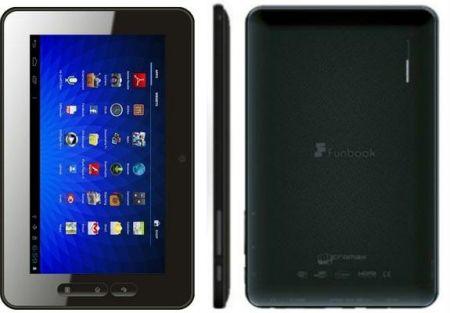 The Micromax Funbook Talk P350 would be ideal for those who are looking forward for a slim, sleek, light weighted and comfortable tablet. The 2,800 mAh batter promises 5 hours of talk time with 112 hours of stand-by. The tablet supports live streaming, while the users can view videos on big screen comfortably using the mini –HDMI port.

The Funbook Talk which comes along with Google's ice cream sandwich OS is embedded with a 7-inch capacitive screen boost of having features like multi-touch and pinch-to-zoom which will make the visibility more interesting. The single front facing VGA camera can be used for making video calls via Skype and other apps. The tablet which does have a 4 GB build in memory can be expanded up to 32 GB with the help of a microSD card.

Keeping in mind of the young generation, the manufacturers has coupled "edutainment" content, ideal for students ranging from primary school level to a graduate level. Those studying for Engineering, Medical and MBA can get access to study materials like sample papers, multimedia, exam preparation materials along with interactive video. Users can get the maximum benefit of GPRS, Wi-Fi, USB 2.0 and HDMI which are available for connectivity. Funbook Talk supports almost all video formats including AVI, MPEG, MKV, RMVB, MP4, MOV, VOB, DAT, FLV and 3GP.

The Funbook Talk is preloaded with applications like Picasa, YouTube, Zip Files, Google Maps, Flash, Document Viewer, Google Calendar and Google Play store which will keep you in touch which your favourite files while on the move.

Even though the tablet is priced at Rs 7249, you can order it at Rs 7,199 from the online shopping website Saholic with one year warranty given by the manufacturer. Currently Micromax Funbook is available only in silver colour only.

In this article, I am going to describe the Micromax Funbook Infinity P275 tablet with full specifications, features, ratings etc. If you are looking forward to buy this tablet PC, then go through this article and get details about the Micromax Funbook Infinity P275 tablet full specifications, features, ratings and price in India.

Read this review of Micromax Funbook Talk P350 to know its features and specifications.