Pros and cons of Jetpack Joyride game
Pros- The game is addictive and thrilling. It can be played for half an hour or 10 minutes, the decision is upto you. The humorous characters add zing to the game. And the nicest thing about the game is it provides you an arcade feel.
Cons- JetPack Joyride is close to the perfect game, but it can't be called as an ideal game, as it suffers from certain glitches and freezes. The pain in the derrire is you are not able to sync progress between android phone or tablet, or iOS and Android. Hence, you need to select a platform and remain glued to it.

It is one among the prominent Android game created by HalfBrick Studios- the same persons who created Fruit Ninja. The idea behind the game is pretty simple. All you have to do is to control Barry- an average Joe who decides to go on for a joyride.

Barry SteakFries is a salesman, who works for a company known as Gramco, a company that is under turmoil. In a search for a potential customer he visits the door of Legtimate Research Inc and he is about to ring the bell. Moving ahead in the downtrodden thoughts he notices some scientists near the jetpack. The jetpack becomes his first love and lust. So, he decided to steal it. Scientists tried to stop him, but all efforts are in a vain.

The plot revolves around the chase between Barry and a bunch of scientists. 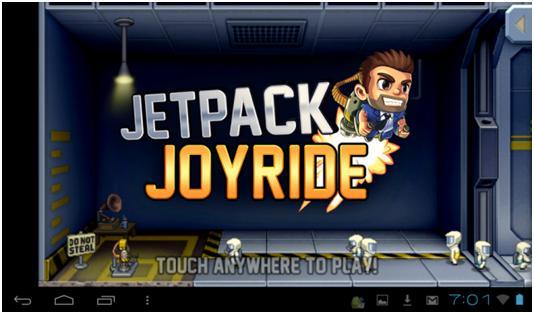 It uses a simple touchscreen control system to control the movement of the jetpack. The player has to move as far as he can. In this process, he collects the gold coins and avoids the physical obstruction in form of zappers, missiles and laser beams.

When the player travels, the spin token appears on the screen. This spin token is quite beneficial for the player; with it he/she can unravel various prizes. If the player doesn't want to spin the machine, then he can encash the tokens for 50 coins.

Aside from that, Barry has been provided with a vehicle that makes the chase all the more difficult. Presently, various vehicles are available to him like choppers, robots, dragons and robotic machine.

The best thing that makes this ride is joyful is Jetpack Joyride game is available on a free of cost basis. Unlike, brick and mortar type games that claim to be free, but in prosaic reality, they are tad pricey. You have to pay for in app purchases- like buying of additional coins, or some other items to move forward. But Jetpack Joyride is totally different and unique. One can have superlative experience in this game without shelling out hard earned money. This feature makes this game truly worth trying.

The player is presented with the three missions, whereby he has to conquer all of them to be declared as winner. In every mission he has to accumulate gold coins that are included in the player's experience and once the last stage is reached the player is provided with two options. In the first option he can either play game without missions or can opt to trade the coins.

The graphics are mesmerizing. They seem to be childish, but then they fit the game well. The game and controls are highly responsive and the graphics are steadfast.

The game is at par, with other video games like Xbox Live Arcade and PSN store games. The console of the game comes for $5-$20; rest the game is absolutely free.

The sound track is immersive and enjoyable. Aside from certain glitches, overall this game stimulates your reflexes.

If you are looking for a review of the latest Orborun arcade game, you are at the right place. Here, you will find the detailed review of Orborun app whose demo version has been recently launched into the market on 23 September 2013. Know about the gameplay, review and price of Orborun game here.