Samsung Group founded in 1938 is the top most mobile manufacturer leading the race producing around 800 million mobile phones still date. After the grand success of their Galaxy series phones, Samsung is up with the mini version of their much popular Galaxy S III which already had crossed 20 million sales just in the time of 120 days. 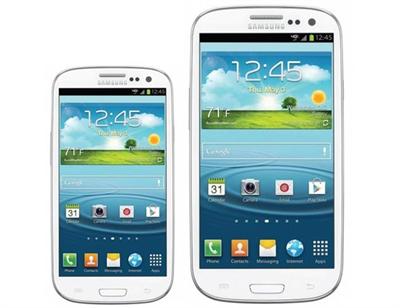 The S III mini which was launched at Germany on 11th October 2012 had already created a huge buzz being one of the Galaxy phones which its fans were looking forward. As the Galaxy mini is a mid range smart phone of Galaxy S III, the phone the specifications and features will be limited. The phone will bring a tough competition at the mobile market along with HTC One V, Nokia 710 and Galaxy Ace 2. With Galaxy S 3 mini, the company aims at European market with an alarming rise in demand for small handsets.

Galaxy S III mini would the one among the best in town and ideal choice for those consumers who wish to have practical smart phones. The smaller and toned-down mini is the compact version of the much popular Galaxy S III version which had made revolution in the concept of design and also with its intuitive usability and intelligence. Already phone had given a huge welcome be fans making it popular around the globe.

The all new Galaxy S III mini is powered by Android 4.1 Jelly Bean, the latest version smart phone operating system which has fast, fluid and smooth graphics. The phones comes along with Google Now, an intelligent personal assistant which uses natural language user interface to perform various actions like answering questions and making recommendations. Galaxy S III mini would be the clone version of Galaxy III which comes along with ground breaking design and elegant look. The ultra-minimal curved frame of Galaxy S III mini offers a rich natural feel, which is reflected on its home screen and wallpapers.

The gorgeous 4.0 inch Super AMOLED display would bring a new experience for customers enabling them to view multimedia and Web content in gleaming colour and lucidity. As it comes along in its compact size, the users feel comfortable to handle it with one hand. Powered by a 1 GHz dual-core processor, the Galaxy S III mini will be quite slower in performance compared with that of 1.4 GHz used in its predecessor Galaxy S III. The phone to be made available in 2 variants, 8 GB and 16 GB can be expanded up to 32 GB with a microSD card. The phone boosts of having a 5 MP rear snapper and a 1,500m Ah battery. For connectivity, Galaxy S II mini do have NFC, 3G, 2G, Wi-Fi, Bluetooth 4.0 and S Beam. To compete with Apple's Sir, the digital voice assistant S Voice developed by Samsung will feature in S II Mini.

Samsung galaxy S II mini is being built aiming mainly at the European market, the phone is expected to reach India too as of being one of the biggest market for Samsung. Even though there is no official announcement about the price of Galaxy S III mini, the phone is expected to sell in India priced at around Rs 28,000. So it would make a tough decision to be taken for gadget lovers either to go for Samsung Galaxy S III Mini or wait for Nokia Lumia Windows 8 phones. The Galaxy S III mini had already created a huge buzz online and also enquiries had been putting up in various mobile stores in the country. So wait for the release and get the first taste of Samsung's next – Galaxy S III Mini.