There's a new game on Google Play which is based on a theme of jungle, the game is named as Angry Tarzan in which a jungle boy (Tarzan) runs in the wild, dodging or killing the enemies either by a boomerang or by jumping on them who come in his way. 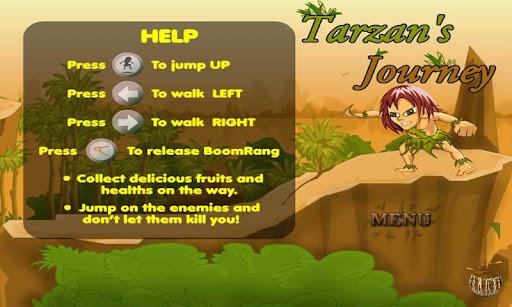 The game is having four controls appearing on the touch screen each one of them having a different purpose. On the left the two buttons are for moving forward and backward. The two controls on the left are of jumping and throwing the boomerang.

Our player i.e Tarzan looks like the same jungle boy having long hair, wearing shorts made of leaves, the same way as the actual Tarzan. The game is pretty good and the adventures included by the developers are quite interesting. Our character has to collect fruit items with the help of jumping and other movements which increases the your score and is the aim of the game. Talking about the energy level now, there's a bar which appears on the top of the screen indicating the amount of energy left with you. If the Tarzan is attacked or is touched by any enemy, the energy in the bar shown above is decreased and the player can survive up to around ten such attacks, there are five such life of our player in order to conclude the game and to start a new one.

The enemies don't exactly look like enemies from a jungle, as you can see- a giant flying ant mutant, a flying cat, a green dog like monster don't actually give the feel of jungle.

The one of the major flaw of the game is that it does nor have the feature of auto saving or even saving, every time you start the game you have to begin the game from the scratch. Moreover, you life is replenished when you complete a level and you will be hard pressed to find hearts in the first few levels to replenish your health.

Now telling you about the pace and graphics of the game, the game is very slow and also the controls don't work properly. Clicking on one control sometimes activated the other one.
Graphics of the game are below average though cute, but when it starts getting stuck you just tend to lose your patience!

Talking about the audio.. it might be possible that the developers became aware about the low quality of the game and didn't spend much time to give a good audio and just used some metal to make the sounds :)

Accumulating all the facets of the game I would say that the game concept is good but the game isn't. There is a lot of room for improvement starting with the saving feature and improving the controls and speed of frames per second. The controls are way too big for the screen but are not precise when it comes to working. It is difficult to cross even the first 3 levels of the game and the initial frenzy which has made this app featured at the top downloaded game will fizz off soon.