Out of many gaming laptops already available in market Blade from Razer and G75VW from Asus are two most powerful notebooks especially designed with inbuilt gaming features and outstanding performance.

Running on Windows 7 Home premium 64 bit operating system, the Razer blade machine performs better for longer duration with a small and powerful 120 watt battery which is really half to the size of other gaming laptop's batteries.

Nice performing machine with sharp and powerful specs is an expensive notebook from Razer for game lovers and will be priced at $2500. You can pre-order Razer Blade laptop online right now but the machine will be shipped to customers within 30 days of booking. 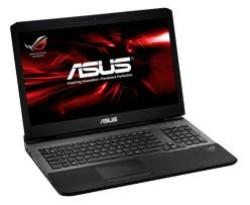 G75VW Windows 7 gaming machine is an expensive gadget from Asus featuring large 17.3 inch Full HD display, HD Webcam (inbuilt), 8 Cell Li-ion battery and also running on Windows 7 operating system empowering Intel's latest Quad-core processor. Asus unveiled its new laptop PC with gaming peculiarity for gaming gadget lovers in Indian market at an expensive price range. G75VW machine performs much better than what one expects from a gaming device. But the Asus machine performs 3% slower than baseline system of world's 7 benchmark tests and less impressive battery life with a frame-rate of 30.8 frames/ second. Despites all these, this is one of the best gaming laptops, available in market.

Its multi-tasking ability makes gaming more interesting and its onboard memory expandable up to 16GB and 256GB SSD, a hybrid 1TB HDD (5400rpm) offers not only large storage but also very fast read/write enhancing smooth performance even in multi-users gaming environment. The 8Cell Li-ion battery with 74Wh; 5200mAh comes preloaded with Asus G75VW laptop and providing 3 hours and 36 minutes of backup support to user.

The expensive price ranged gaming notebook from Asus is already available in Indian market at the price of Rs. 1,39, 999/- (around $2500).