It is quite interesting seeing the competition in tablet market nowadays is getting tougher day by day. Daily we see new and improved tablets from several manufacturers. And now Intex has come up with a low cost tablet device.They have recently released their latest Android-based Tablet named as “I-Buddy 7.2". Intex I-Buddy 7.2 runs on Android ICS 4.0. It's a low cost tablet available for just INR 5500/-. Intex has brought some changes in design as compared with its previous I-Buddy 7.

The new I-Buddy 7.2 is powered with 1GHz Cortex A8 core A13 processor and 512MB DDRIII RAM. It also includes Mali-400 GPU with 2D/3D Graphic acceleration support. I-Buddy 7.2 features a 7-inches capacitive touchscreen with 5-point touch support and having a resolution of 800x480 pixels. It's worth mentioning that the dimensions of I-Buddy 7.2 are 194x120x13mm weighing just 330gms (approx.) making it light weight and slim one. 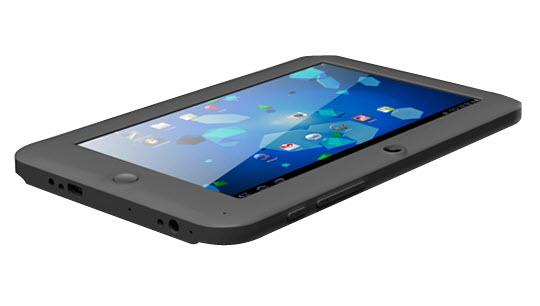 Other specifications of I-Buddy 7.2 include 4GB internal memory and external microSD card support of up to 32GB. I-Buddy is loaded with a 2800 mAh Li-ion battery good enough to run tablet browsing for about 3-4 hours and stand-by time of around 170 hours. It comes with a sub-par VGA front facing camera which can be used for video call and self-portrait purpose. For network connectivity it includes Wi-Fi (IEEE 802.11b/g/n) and a USB port for 3G dongle.
I-Buddy 7.2 natively supports most commonly used Audio/Video formats such as MP3, AVI, RM, MKV, FLV, AMR, etc. It also supports the latest Adobe Flash Player 11. The tablet comes preloaded with some famous apps and games such as Cut-the-rope, Angry Birds, Fruit Ninja and many more can be installed from thousands of available at Google Play Store. I-Buddy 7.2 tablet comes with one year warranty from Intex.

Presently Indian tablet market is flooded with numerous low cost tablets from the makers like Aakash, Reliance,Micromax, Intex etc. providing buyers so many choices starting from low range tablet like I-Buddy to high range tablets like Ipad etc. It is clear that Intex has launched I-Buddy 7.2 to create a swirl in low range tablet market segment.
Though I-Buddy 7.2 is a slim, nice looking, feature rich tablet but it is recommended only for new Android users not the hard-core Android users; they should better look for a more powerful and advanced tablets. If you're new for Android and looking for a tablet in your budget, this can be right choice for you. Intex I-Buddy 7.2 is priced for INR 8,000/- but can be purchased exclusively at sanpdeal.com for only at INR 5490/- or $105.

Use of Android in variety of electronic devices

Have you been using Android devices like smartphones and tablets? Want to know about other Android-powered devices like camera, TV, smartwatches, etc.? Searching for Android-powered in-car systems or in-built Android TV launched by Philips at CES 2014? Kindly read further to know how Google's Android can impact a variety of electronic devices.

Intex iBuddy Connect is an affordable 7 inch tablet for youth. This article talks about all its specifications, features and price in India. Intex Technologies is known for its budget friendly products for Indian customers. The company is again in news with the launch of its 7 inch iBuddy Connect tablet with voice calling facility. This device would give a tough fight to all other tablets under the same price range.

How about bringing home a kitchen appliance developed with a cutting edge technology? The innovation has come true through the world's first Android wall oven manufactured by Dacor. Take a look at the post to explore the creativity incorporated by the masterminds.

Learn how to turn your normal TV into a Smart Android TV. A cheaper and efficient way to turn your LCD TV into an internet enabled Smart TV is described here.

How to Run Windows XP on Android device