Normally people uses hard disk drive, USB flash drive as well as CD/DVDs for storing the digital data which may be any documents, pictures, movies or music files. Each document requires certain digital format and storage facility for later use. What happens when computer's in-built hard drive or external hard drive fails? Have you ever experienced uncomfortable situation of losing the data due to improper use or due to carelessness? Now here is a solution for it. Nowadays different cloud storage facilities are offered by different companies. Dropbox, Google Drive, OneDrive, Mediafire etc, which are nothing but cloud file hosting service providers. 'Cloud' term in IT language is the storage available online which you use by connecting to a network. These services may be or may not be free based on the requirements and conditions set by service providers. Here in this article I am going to share how to use Dropbox and its services to have your backup/files handy.

A Dropbox is a free cloud servicing founded in 2007 by two MIT (Massachusetts Institute of Technology) graduates namely Drew Houston and Arash Ferdowsi with the company name as ' Y Combinator startup company'. The idea of using commonplace for storage on the internet came to Drew Houston's mind when he usually used to forget his USB flash drive. In 2008, it was officially renamed/declared as 'Dropbox', a box in which you can drop your files for storage purpose.

Dropbox as an online backup service provider gives the facility to their users to store their files to a common folder named 'Dropbox' in user's computer. And this folder is also linked to Dropbox website where you can find the same files. Changes in Dropbox folder in terms of editing, addition or deleting of files is replicated to the common cloud of that user in Dropbox website/server. User can access these files from anywhere in the world, just by logging in to the Dropbox account or by simply installing Dropbox to any computer connected with Dropbox. When you start your office/work computer having internet access, it will start synchronization/uploading file changes in your home computer's files. Means you have same folder of Dropbox at office similar to that at home. The only requirement is you need to have internet access with a login to Dropbox website.

How to configure for Dropbox facility?

Once you start up for the first time, you will be asked to download the Dropbox setup. Means you need to install Dropbox software so that it can replicate your Dropbox files locally on your computer. Download and install the Dropbox and you will have Dropbox shortcut created on your desktop. This will redirect you to a common folder created for Dropbox synchronization. 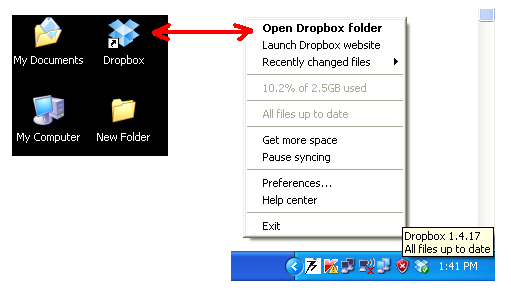 You will also see a taskbar entry of Dropbox. If you click on it, it will show you followings:
1. Open Dropbox Folder. This will open Dropbox folder for editing.
2. Launch the Dropbox website. This option opens the Dropbox website.
3. Recently Changed files. Shows the recently changed file names.
4. 10.2% of 2.5 GB, meaning you are using 10.2% of total capacity. Initially, Dropbox gives us free 2.5 GB space but it can be upgraded to higher by paying certain fees or inviting friends.
5. All files up to date show the status of the file's uploading status
6. Get more space
7. Pause Syncing

These are very useful points that will be available in taskbar.

You can change any files in the folder and it will start automatically uploading to the server. Once you open the Dropbox folder at other location, that changed files will be syncing at that moment of internet access. And you are ready for work from where you left previously.

Thus, Dropbox helps you to store files over the internet to have access from all the places across the world.

Following post provides some of the best alternatives of dropbox, one of the prominent leader in cloud service providers. Over the period of time, many alternative competitors of Dropbox emerged in the market but it still managed to hold its position