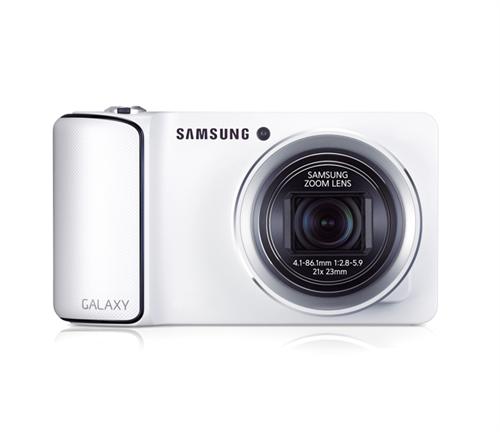 Samsung, the branded Korean manufacture is always startling the tech world with their amazing products. They have produced many well known products under different gadget categories like mobile phone, refrigerator, television, computer, laptops and digital cameras. Recently, Samsung has startled the tech world by bringing first Windows 8 Samsung Smartphone ATIV S. Now, they are coming with their latest product Samsung Galaxy Camera which features latest Android operating system Jelly Bean. New Galaxy Camera has been officially launched in Berlin at IFA 2012 and is going to reach India in second week of November. That means the gadget will reach Indian market during Diwali time.

Except iOS, the most commonly used operating system in tablets and smartphones is the Android operating system Now, recent developments in this operating system makes it compatible with other gadgets also. Latest Samsung Galaxy digital Camera is coming under strange and weird Android devices. Latest technological implementation has made the device equipped with advanced features that are absent in normal digital camera. 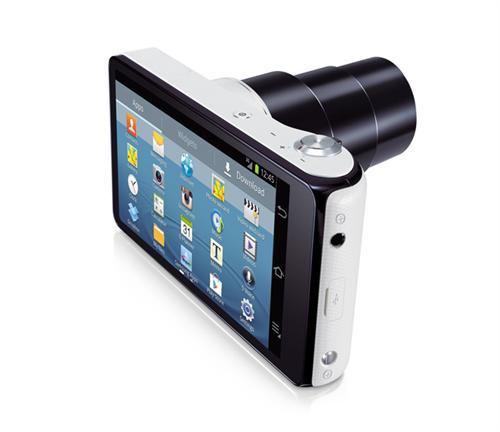 Samsung Galaxy, the trade name has become one proud series from Samsung Company. Majority products coming under the trade name Samsung Galaxy are front runner in world markets. Samsung has produced mobile phone, tablets, laptops etc in Galaxy series, now it is the time for digital camera. As in their previous Galaxy products, new Samsung Galaxy camera will surely give lot to brag for the consumers. Main attraction of this product is Android operating system which is making the device strange and weird. The new Samsung Galaxy camera is similar to a smartphone except for the the calling feature. Now, let's move on to the specifications and features of this upcoming Samsung Galaxy Digital Camera. 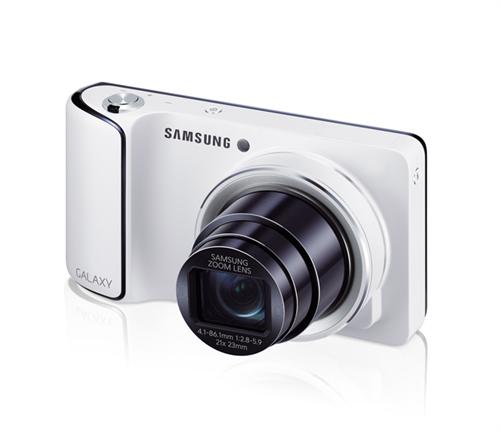 New implementation of Android OS has included wide variety of features in this upcoming Galaxy digital camera, such as gaming, sharing in real time, touch screen features, voice recognition and more. Moreover, this device is giving magic of professional digital photography with the powerful intelligence of the latest Android Jelly Bean OS. The brand-new Samsung Galaxy is powered with 1.4 GHz quad core Exynor processor and is providing fast, smooth and powerful performance in this device. Powerful processor equipped in this device is making the device more flexible in working. Samsung Galaxy Camera is having 8 GB internal storage in the device and can expand up to 32GB using microSD card. Higher memory capacity in this device is giving provision for storing more photos to the consumers. 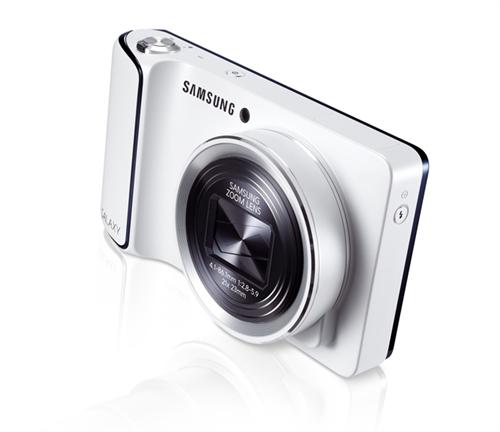 Samsung Galaxy Camera is coming with aesthetic beauty which may capture many hearts. Body of this camera is of compact type in which one side contains camera while other side contain 4.8 inch screen with touch input feature. Touch screen of Samsung Galaxy camera is closely similar to Galaxy mobile phones. This camera is available in two different colors such as black and white. Body of Galaxy camera is having the dimensions of 128.7 x 70.8 x 19.1 mm with 305 gram weight. It is featuring a 4.8-inch S-LCD display of 16M-color AMOLED capacitive touch screen with a resolution of 1280×720 pixels translating into 308 ppi. Screen is having corning Gorilla glass which acts as scratch resistant. This camera is having nice user interface which may strike the hearts of many. 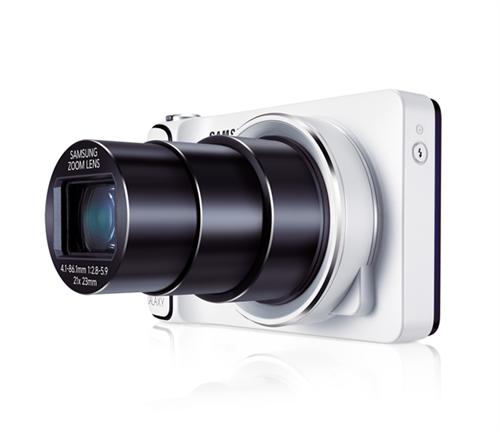 Advanced image capturing features equipped in Samsung Galaxy camera makes it more attractive. It is coming with 16 Mega pixel sensors with an f/2.8 aperture and auto focus feature which is helping to capture images with excellent color and better resolution. This device is equipped with 23mm-480mm lens that has 21x of optical zoom, which will help to capture distant images. New Galaxy camera is coupled with Xenon flash and automatic flash light which is helping to capture clear images even in dark atmosphere. This device is not only supporting still photography but also video shoot with high definition display. 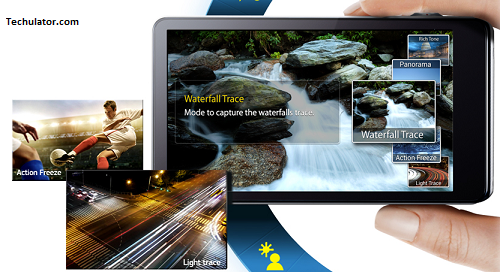 New Samsung Galaxy Camera is helping the users to shoot like a professional photographer. Smart pro equipped with this device is making the shoot easy and outstanding. This camera supports 10 mode of pro such as Macro, Rich Tone, Action Freeze, Waterfall Trace, Light Trace, Beautiful Sunset, Blue Sky, Natural Green, Silhouette, and Vivid Fireworks. User can chooses either one pro to shoot with perfection. Samsing Galaxy Camera supports slow motion video recording, which will help you to capture most precious moments at an amazing 120 frames per second and 720x480 resolution.

Samsung Galaxy is providing you more fun than that you are expect in a digital camera. New technological implementation has made this budding device more attractive and mind blowing. 4.8 inch super clear display is providing you fine photo display in extremely large screen. Minimal organic design helps to take pictures more easily in this device. As the device is working under Android OS it supports games such as angry birds, fruit ninja etc which makes your free time more entertaining with this camera. Voice recognition feature is enabled. You can use voice commands for zoom in or out, set the timer, and snap the photo when you're ready. Also, when you're in the gallery, tell it to rotate, delete, and even share your photos.

This smart device is providing you wide variety of professional editing features which help to edit the image, making videos and even organize the contents with amazing set of 65 editing features on board. This device is having photo wizard facility, which helps users to make professional editing on the images. Movie Wizard editing feature allows users to make and modify better quality videos easily with touch input. Quad core processor is easing the fast performance of the editing in this device. Smart content manager inbuilt in Samsung Galaxy camera is organizing the content more intelligently by creating folders, tagging faces, and even making suggestions to delete pictures that didn't come out well as you wanted. 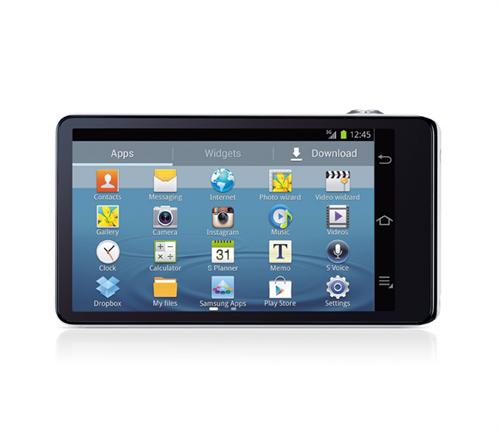 Samsung Galaxy camera is providing the facility to share your photo over the internet with latest Android technology. Auto Cloud back-up feature of Samsung Galaxy camera automatically saves your precious photos into the cloud the instant you take them. The brand- new camera is budding with connectivity options, includes 3G (HSPA＋ 21Mbps), HDMI 1.4, WiFi a/b/g/n, WiFi HT40, Bluetooth 4.0 and GPS, which will help you to stay connected everywhere. You can connect, upload, share, and even post to your favourite social media using this Android Samsung Galaxy digital camera.

Fresh Samsung Galaxy camera is having 1,650 mAh batteries which are providing better battery life up to 7 hours. User can download applications from Google Play store to make it more entertaining. This device is adding applications like calculator, calendar, clock and photo-sharing options like Facebook or Instagram.

Now, you are realizing that the Samsung Galaxy camera is not at all an ordinary camera and which is providing more fun features that are available in most of smart phones. With latest implementation of Android operating system in this digital camera, Samsung has startled the digital camera world. Upcoming Samsung Galaxy camera is expected to coming in India during November and the price will announce along with close time of the launch.

You might have tried all the smartphones before and got lots of good experience in 2G and 3G network but sometimes you need to increase the internet speed for a high-speed browsing experience. Here is the complete procedure to change E to H in a smartphone easily.