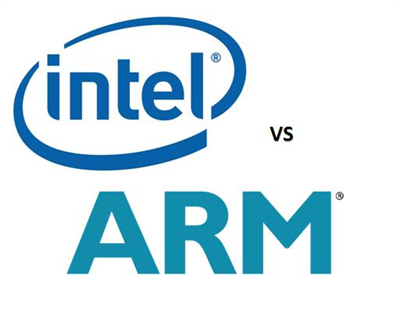 But the demand of power efficiency and high performance is changing the industry shape. ARM manufactures most power efficient processors for smartphones where as Intel is able to increase the performance with the shrink in die.

Intel now aims to capture the fastest growing Mobile and smartphone industry where as ARM has an eye on $50 billion sever market.

History says Intel has always worked on the less die size with high performance improvement roadmap suitable for computer and severs. On the other hand ARM has always tried to make its processors, more and more power efficient for the embedded systems.

Many companies use ARM processors for developing their embedded system where as Intel processors are only being used for computers and servers.

One of the most significant differences between ARM architecture and Intel x86 architecture is in the method of loading of operating systems (OS) during the booting period.

In Intel x86 architecture, you need a boot loader popularly known as Basic Input/output System (BIOS). The basic function of BIOS is to transfer or load the kernel from file system to RAM (Random Access Memory) and the execution of kernels. After the execution kernels take over the control and have access to the file system. The boot loader is always placed in the boot sector of the hard disk.

Let's have a look on some more differences: -

CISC can perform wider range of processes and much complex processes. Due to less requirement of instruction set RISC chip can boost the speed by overlapping instruction execution.

As a result, Intel uses decoders to boost up the speed at the cost of higher power consumption by decoders.

ARM chips are power efficient in smartphones but cannot guaranty the efficiency when it comes to PC industry.

Intel's scientists and engineers have recently develops the 3D transistor which are power efficient as well as provide high performance.

ARM: Bi-endian (Both little as well as big endian)

If you are planning to purchase a new laptop with high end features like high speed processor, vast memory and large hard disk capacity to store your content within an average budget of 35,000/-, then here are some of the best notebooks for you. These laptops offer Intel i5(3rd Gen)processors at the price of 2nd Gen laptops.