Cons: Few models and some graphics of this game are a little bit ugly. Within the Game, there are plenty of hidden object scenes.

Clairvoyant: The Magician Mystery, is a fairly nice and easy hidden object game with some adventures and this will be a good game for you to enjoy your time with. Do you love to become a psychic detective? Then this game will fulfil your wishes. I used to avoid hidden object games, but this game had attracted me towards its inner core.

You need not be a hidden object game fan to get attracted to this game, even if you are not a HOG fan, you will really love this game. There are a lot of interesting features within this game, as the time comes I will explain all of such details clearly. Now let us take a deep walk towards the core of this game and I will be able to give you every details about its features, pros and cons.

The main objective of Clairvoyant: The Magician Mystery game is to find the famous magician, who had gone missing during a popular carnival. In this operation you are being assigned to investigate the scene using your special skill power Clairvoyance, which is nothing other than your power of sixth sense. Within this game you will be interacting with many peoples like puppets, clowns, sideshow acts etc. about the magician. This type of interaction with those people will help you track down the magician and find him. There are chances for magician to voluntarily disappear, as there was a huge fight between he and his mistress.

Clairvoyant: The Magician Mystery delivers a fantastic storyline, but gameplay of this game is comparatively poor when compared to other similar hidden object games. The game features a large amount of bulky hidden object scenes which might make you feel incredibly tiresome work to investigate. I was little bit disappointed with this feature of Clairvoyant: The Magician Mystery. But the game also entertains its players by providing same scenes multiple times for you, which to be completed routinely, with the hidden items remaining in its own original locations. You can check also to Play Facebook Games.

But although this feature may entertain some gamers including me, most of other gamers will feel boring to complete the same scenes again within 1-2 minutes. The game Clairvoyant: The Magician Mystery also lacks delivering more to do outside the scenes, if the developers of this game added mini game feature to have more fun outside of scenes, it would have made this game more interesting and adventurous one, also resulting in more number of fans and the game might have became more popular.

While going further deep into this game, you will also be able to see more interesting features that have been packed along with this game. As you raise level by level, you will have to collect key items from each level of this game. You will also be investigating different areas of the carnival during different stages of this game. You will be unable to freely travel between them, as each part of the carnival are divided into several stages of game. I became more disappointed this time, due to the less space to explore, which made me feel like I have been caged. 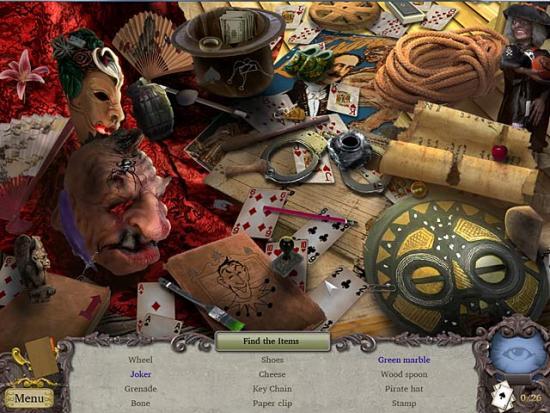 Clairvoyant: The Magician Mystery also features a wonderful fun filled puzzle games within this game, compared to other similar puzzle games, the one this game provides is pretty much easier to complete. You will feel this puzzle game to be a combination of carnival mini games.

As I mentioned earlier, the limited space as well as the limited environmental exploration also made me irritated at most of the occasions, even the game's in-game hint system delivers a very poor quality. Like what we used to read on Sherlock Holmes, here in this game, your sixth sense will help you imaginate what was going on in the location before you had arrived there. Due to this fine ability, I love this skill of Clairvoyance and it is considered to be the only element, which is a major unique one in this game.

Finally, it is time to wind up my review, as you had spend some of your great time to look into this game, I am sure that you might have loved the interesting features of this Play Game. You can have this game to enjoy in your free time, as the game delivers such a perfect and wonderful gameplay and various other elements to stick with.

Once you start playing Clairvoyant, you will be able to feel that experience, which makes you feel more original and thrilling. Honestly telling, this is the game, where I got more inspired to explore more and expect more from the game.

Suburban Mysteries: The Labyrinth of The Past game review and walkthrough

Amazing Adventure: Riddle of Two Knights is a adventure genre game. This review includes tips and a detailed walkthrough of the game.

A detailed review of Ichi - A game for Android, iOS, PC and Mac along with detailed Walkthrough and tips.