Pros and cons of Critter Escape game
What I liked
I liked lot of things like the story and concept.

Where it is lagging
Graphics of the game are bad.

A new game alien themed game has arrive in iTunes. The name of the Game is Critter Escape. This game has been made for the Apple operating system and runs good on the iPad and iPhone. In this game you will be dealing with the alien life and in this game you have to escape out from the experimental facility. The whole game theme is based on Government not allowing alien life to visit our planet freely and just capturing them for experiments. So, to learn more about this game and also to see whether this game is worth for play or not, let's read more about this game as we scroll down the page.


Tell me about the game

Some of the games defined by the platforms they run on and Critter Escape is one game probably which will work nicely only on touch based iOS and Androiddevices. Let's discuss about game named as the Critter Escape. This game is based on a story of an alien creature who has got stuck at our planet and has been taken by the government secret agencies to study. There he was treated for various experiments, which were futile in the nature. So, in the game you play the character of the alien, who is tired of the rude experiments done on him and now wants to escape the experimental facility as soon as possible.

So we can somehow say that it is a mixture of arcade plus the strategy genre. Since this game is specially made for the touch screen phones of the Apple, the controls are fully through the touch screen. For instance if you want to move your character in the game, then you have to sweep the screen to the desired point where you want your character to move. But if you want to pause the movements of the player then just tap another time and the character ceases to move. The first level of Critter Escape is pretty simple and you have to sneak out from the places and that too when these places are guarded by various personnels. 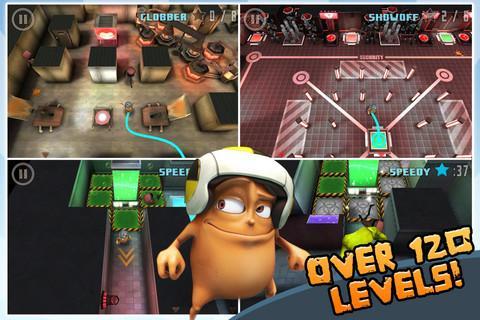 As such you don't have a weapon in Critter Escape Game but you have certain objects available in the game that you can use as weapons. For instance at the lab facility there are various things like the smoke bottle, poisonous gases bottle. So you can use them to deter the guards and sneak out from this place. So, on a whole Critter Escape runs very good and there was not a single technical issue with this game.

How Critter Escape is different from other games

Critter Escape game is different from other games in various aspects. Our cutie pie (alien) is a new character and I have never seen this type of characters in these types of games. Secondly the storyline of Critter Escape game is very different. So, on a whole you will find this game a little different from other Play Games. The levels and the mission of this game are also very different.

The user interface of the game is very easy to use and is of very straightforward nature. You have detailed menu which have been made with straight directions and also there are other good stuff. The graphics of Critter Escape game let us down and this thing has to be corrected by the developer of Critter Escape game. So on a whole the graphics of the game are good but not that bad as you cannot play with it.