Pros and cons of Adventure Time-Legends of Ooo-Big Hollow princess
Pros- The game has immersive and colorful animations. Funny dialogue and voice acting renders more charm to the game.
Cons- The game is too short and needs more action and fighting, else a fun game to play.

Fish out secrets and win the game
Adventure Time-Legends of Ooo-Big Hollow princess is a game that revolves around a powerful new magic. It is a lovely mobile game that has released in the market recently and yes, it has been made on the lines of the Adventure Time which was a cartoon show aired on Random! Cartoons.

Adventure Time-Legends of Ooo-Big Hollow princess is all about the Ice Kind who has frozen Hot Dog princess, Slime princess, Princess Bubble Gum with a magic spell. Your role is to safeguard them and what acts armory in your defense are your friends Finn and Jake, who are also in a same mission. 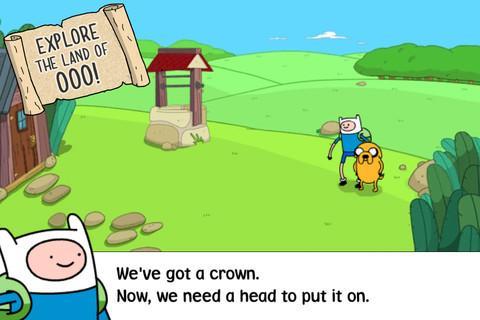 Adventure Time-Legends of Ooo-Big Hollow princess is a maze where you have to find clues, solve puzzles and break the magic spell created by Ice King. The USP of the game is voice over by your favorite character, recorded in the mobile game.

Adventure Time-Legends of Ooo-Big Hollow princess is easy to play and you can call it as a tap adventure. With one tap you can go somewhere, pick something, get the hint and talk to your character. It's an adventure time. So, come on play the game. Moreover, what adds charm to the game is Jake, the dog and Finn, the human. So, now your fun will never come to an end; if you have ipad in your hand. Nonetheless, the game is compatible with iPad, iPod touch, and iPhone. 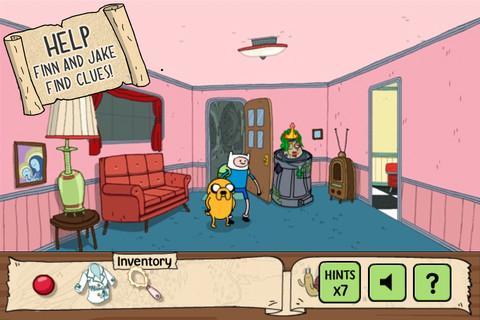 The game is funky and it appeals to all generations- from newbies to hardcore fans. Here are some unique features of the game.
• It is an adventure game.
• It features characters and locations from your favorite show.
• Puzzle solving with Finn and Jake adds charm to the game.
• Voiceover performed by your favorite character make you speechless
• The game is available at for $0.99.
• The voiceovers are exclusive to this iOS game.
• Animations are smooth and the guitar sound grabs the attention, at the first instance.
• You will travel to exotic handful of locations, where you will be able to explore each area within two minutes of time. Sounds cool, isn't it!

The major drawback of Adventure Time-Legends of Ooo-Big Hollow princess is, it lacks in content. Even the games that I played in childhood Putt-Putt, Pajama Scan had more challenge. The puzzles also don't offer much to the players. For instance, at the end of the game you will find a bear suffering from hunger pangs. With a tap of screen you'll find that honeycomb is trying to feed it. When the things are so simple, no one enjoys playing the game. Who wants to act dumb, when he is not?

The most ridiculous part is game offers a currency for hints, it is weird and insulting. The other major disappointment is the voice over apply to just protagonist characters like Finn, Jake and the Ice King. It's just like reading the half book, especially when you are forced to read second half of the conversation.

The game does not live up to player's expectations, and is not compelling and addictive, on the first beat. What adds fuel to fire is the game is too short.

Read this article to know about the multiplayer (MMO)game Divina and know the pros and cons of the game. Know what the game Divina is all about and what are the features of this game. Read the release date and watch the preview trailer of Divina game

Super Mario has been wonderful joyous game from the day it was first launched. Read this review to learn more about this game.

Read this review of the Facebook and Apple iOS game Pet Vegas along with it's gameplay and other features of the game explained.

Read this review of AviNation, an online game for Facebook and learn some tips to play the game.

Review on Legends of Ooo - Big Hollow Princess gameplay is well written here. This game is just for $1, good to play.