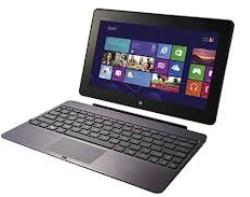 A number of best Windows 8 Transforming Laptops have been announced during IFA 2012 event in Berlin. Vivo Tab and Vivo RT are also recently uncovered transforming laptops from Asus that are running on Windows 8 technology platform and showing many common features such as 2GB of RAM, NFC-ready, same display resolution of 1,366 x 768, two USB ports, a TrackPad, one secondary battery, NFC sensors and also attractive transforming ability with a full QWERTY keyboard.

The embedded mobile docking ability in both Windows 8 machines lets both tablets to transform into a notebook PC. Let us have a look over specifications and features of both Asus hybrid machines:

The Vivo Tab hybrid device also owns 8MP rear-facing autofocus camera with Flash for enjoying video recording. On the other hand a 2MP shooter up front also provided for photography and a NFC sensor.

The tablet/laptop runs on upcoming Windows 8 operating system platform that enables the device to access both - traditional desktop applications as well as Modern UI/Windows 8-style, UI/Metro and many more apps via Windows store via its x86 architecture. The machine encompasses next generation Intel Atom CPU coupled to 2GB of RAM and 64GB of onboard internal storage.

The transforming laptop device comes packed with a keyboard dock like ASUS Eee Pad Transformer for converting the touch-screen tablet to a full laptop experience for users and also having 2 USB ports and a TrackPad.

The second battery option to boost up battery backup seems to be another impressive gift of Asus for its valuable customers.


Though no official announcement for Vivo Tab price made from Asus, still the most anticipated price for this hybrid machine goes around $650 to $750. And about Vivo Tab release, the Asus machine will be released along with/after release of Windows 8 OS on Oct 26, 2012.

Unlike Vivo Tab brother, Vivo RT also runs on ARM version of Windows 8 named Windows RT that has access to Metro apps and full Microsoft office. But the other traditional desktop applications can't run on the ARM-powered machines. The machine runs a quad-core Tegra 3 processor with a 12-core GPU like Eee Pad Transformer, also coupled to 2GB of RAM and 32GB of internal storage.

The Vivo RT hybrid boasts of rear-end 8MP autofocus camera with LED Flash plus one 2MP shooter up webcam front and also having NFC sensor.

The machine also has a secondary battery for providing more backup support to users and 2 USB ports for connectivity and a keyboard dock for transforming tablet to laptops.

No official announcement for Vivo Tab RT price from Asus but as Windows RT machines sure to priced lesser than above Windows 8 machines hence Vivo Tab RT will be less costlier than Vivo Tab. About Asus Vivo Tab RT release, the machine will release along with or after release of Windows 8 on Oct 26 this year.

In this article I have given all the details of some of the best and cheap Asus laptops available in India. I have also mentioned about all the features and specifications along with the price details of every individual laptop.

This article mainly deals with the features and specifications of the newly released Asus UX31A-BHI5T11 laptop. This article makes you aware about the complete details of the Asus laptop. This will also show you from where to get it at its best price. Now let us take a look at its features.

For all you serious gamers out there ASUS G75VW-DH72 17.3-Inch Laptop is a perfect one for you. This powerful laptop promises to provide you with uncompromised performance with its latest 3rd generation Intel i7 processor along with 16 GB of SDRAM. It has a graphics memory of 3072 MB, which gives you perfect results when it comes to playing latest heavy games. Read on to know more about this gaming laptop.