Apple has launched its latest MacBook Pro with Retina Display which is an upgrade version of MacBook Air and MacBook Pro. It has the resolution display ever on notebook and has more integrated design that achieves a level of fit and finish never possible before. Finally it had made its way to Indian shelves and those who are looking for an upgrade to this high-res notebook can get at a price of at Rs. 1,52,900/- onwards. Unfortunately only one seller has showcased this product in India (@buytheprice.com), but will be delivered in 1 to 3 days with no shipping charges. Let's have look on its specifications, features and performance in detail. 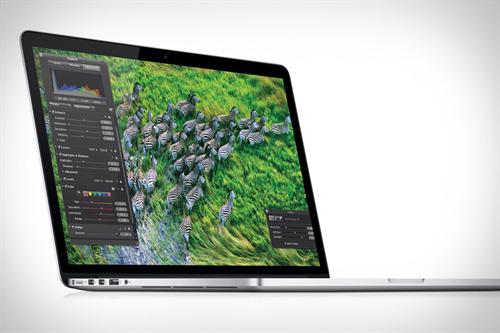 The 15-inch MacBook Pro that features a stunning Retina display, all flash storage and quad-core processors in a radically thin and light design. It measures a mere 0.71 inches and weighing only 4.46 pounds. Apple has managed to cut down the depth of the note book and the aluminium finish on body just looks gorgeous. Despite the thin edges you can get two USB 3.0 ports, two thunderbolt port (you can connect up to 14 devices 7 per each port), Apple Thunderbolt to Gigabyte Ethernet adapter (sold separately), Apple thunderbolt to firewall adapter, 2 HDMI video output, SD card reader and a 3.5mm headset audio jack, 720p Face Time HD camera. It also featured two mega safe power connector, still you can use old charger with an adapter.
The battery of Apple MacBook Pro comes with a powerful package OS X Lion which delivers up to 7 hours of wireless productivity. Apple had done pretty good job in this aspect. And consumers who purchases the MacBook are eligible for a free copy of OS X Mountain Lion when it become available.

The main and very important point to discuss is its its screen display Retina Display which is the selling point comes with a Backlit display with IPS technology with a high resolution of 2880x1800 (220PPi). Apple had all set to change the new generations MacBook Pro with its Retina Display, the device claimed its high position in this department. A full HD video is well dwarfed leaving enough space for a time line and other playback controls. The MacBook Pro received an Ivy Bridge Update, and the 2.7Ghz processor can be turbo boosted to 3.7GHz and further it utilized NVIDIA GeForce GT 650m graphics. Simply I can say we can get effect of watching 20 inch in 15 inch screen with a sharp images, rich colours and great clarity of videos ever before. Images are clearer in its original and can see everything in detail, importantly for editing images it gives the best. Most of the high resolution displays will end with blur and less clarity but thanks to the Retina Display which gives best view and gives best gaming experience and even give protection for your eye with an anti glare which had made it more special.

The inbuilt stereo speakers had a high quality output and the MacBook Pro includes 802.11a/b/g/n Wi-Fi with 2.4GHz and 5GHz support, as well as Bluetooth 4.0, so you'll be able to connect to almost any hotspot or wireless audio device. 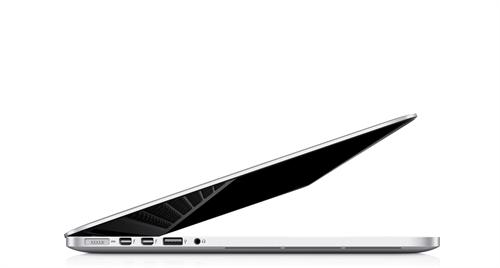 Performance and other features of Apple MacBook Pro Retina Display

The Apple MacBook Pro with Retina Display comes with Intel Ivy Bridge processor, 8GB RAM, and 256GB SAT A3 and a dedicated Nvidia graphics. The Quad-Core i7 processor runs at 2.3GHz. As expected performance is tremendously fastest and claimed multimedia benchmark an overall score of 111, which made MacBook one of the quickest laptop till date.
Coming to result of its speed test it had copied 1.22GB folder from a USB 3.0 in 21 sec, which is half time we need to copy from any USB 2.0 port. The speeder drivers are likely faster by using Thunderbolt interface. The dedicated GT 650 M graphic chips help in dealing with HD videos and are still capable of playing modern games. There is 1GB Ram dedicated to lessen the impact of anti-aliasing. At a frame setting of 30.8 rate it will play games very smoothly as long as we stick to 720p resolution.
Further Apple sourced with applications like Safari, Final Cut Pro and Aperture.

This latest invention of Apple is intelligent, fast and an all rounder and with a gorgeous Retina Display all Flash architecture, lightest and thinnest is a next generation and most advanced laptop ever seen.
But for its reduced space it lacks of a DVD drive and an Ethernet Port for an Internet connection directly, one should buy an Ethernet Adapter for the thunderbolt port.
Again the price tag is too high in India available at Rs.1, 52,900/-, where one has to pay extra bucks to have this marvellous device. If one plan to get from neighbouring countries you can cut to its original price and become the pride owner of the master piece. I feel like the next coming devices from Apple or any other too has this Retina Display feature and open doors for this new technology and of course a price which fits every requirements and pockets.