As part of its effort to improve its hold on the smartphone market, the consumer electronics giant LG announced a series of smartphones in last few months. The LG Optimus 4X HD is definitely a frontrunner in the new smartphone area with its quad core processor and super clear display. Check out reviews of other LG Optimus series phones.

The LG Optimus 4X HD smartphone was originally announced at the Mobile World Congress in February 2012, but it took awhile to reach the smartphone market in the global market. I got a chance to review this phone in a launch event in Mumbai and then got the phone for a detailed video review couple of days back. If you'd like to learn more about the 4X HD Android phone, read this hands-on review.The LG 4X HD comes in a small, stylish box. The box contains the phone, a 3.5mm earphones, user manual, power connector and a micro usb cable. The package is very attractive, even though that is not the real criteria to judge a phone. 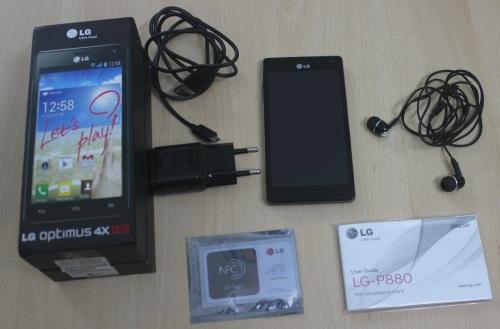 The Nvidia Tegra 3 Quad Core Processor in the LG Optimus phone is powerful enough to run most of the mobile apps and can play any mobile games currently available. With 1.5GHz clock speed and supported by 1Gb RAM, this phone is definitely a power horse. It boots up instantly and you can start the job without having to wait for the phone to get ready. Supported with 1GB built-in RAM, this phone is your best buddy to perform any mobile computing needs.

When you turn on the phone, the first thing you notice is the crystal clear, high definition display. The 4.7" True HD display is considerably big and larger than most other smartphones. Remember the iPhone 4 display size is only 3.5 inches. When you place this phone near an iPhone, it looks much wider and taller. The very responsive screen improves the experience significantly.

Optimus 4X HD offers 1280x720 display (compared to 960 x 640 resolution of iPhone 4S), which is not very common in smartphones. This LG phone offers very good brightness and colors. The lcd screen on 4x HD make the images more richer in color and the brightness of the screen does not affect your eyes when you are using it in the sunlight. 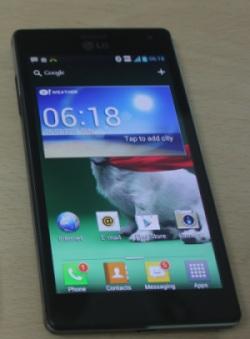 The super clear display of LG Optimus 4X HD is protected by LG's trademarked Corning® Gorilla® Glass, the same kind of glass that protect many of LG devices. The Corning Gorilla glass offers high level of damage resistance to the drops and scratches from daily usage.

Even though the glass is damage resistant and strong, it is still highly sensitive to touch operations in the smartphone. Also, it makes it easy to clean this smartphone. It need to be noted that the Samsung Galaxy S3 has a slightly bigger screen (4.8 inches), which is not really noticeable unless you hold it too close.

The phone with a bigger screen make it easier to work or play on it yet slim enough to carry it with style. If I have to point out any drawback, it's the lack of ergonomic edges. The metallic double band edges, that look like 2 raised lines, do offer a good grip to hold the phone in hand, still not an attractive design for a high end smartphone. The LG 4X HD is available in 2 colors Black and white. When you look from far, the ridges on the side are very prominent. The hardware buttons in the black plastic are hidden between these metallic lines. (When I passed this phone around my friends for a general first look and feel they found the phone design with metallic dual line on the edge stylish and elegant.)

I am sure the first time you use this phone you will be really amazed the way you unlock it, although you have the standard screen lock types like draw pattern, enter pin, password and the facial recognition. You can touch at any part of the screen and then move your finger in any direction which create a circle around the spot which ripples outwards, gets bigger and bigger and then unlocks the phone. It is the same way you answer a phone call.

Overall, the design of the 4X HD is stylish and elegant and can compete with any other high end smartphones currently on the market.

The 4X HD comes with a 8mp back camera with a LED flash light and the secondary one on the front which is 1.3mp for having video chats. The performance of the camera in 4X is great in almost all situations. The flash is very powerful and can take flawless pictures up to 5 feet in low light condition. Here is a picture of a toy taken with Optimus 4X at low light condition with the LED flash: 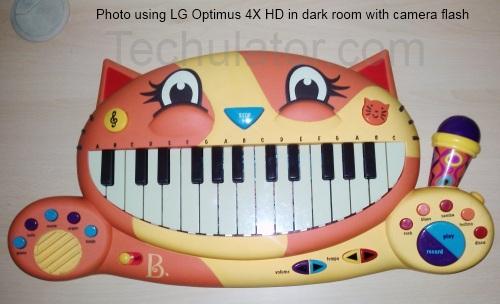 You can see a slight reflection of the camera flash on the object, but other than that the picture has come up well. 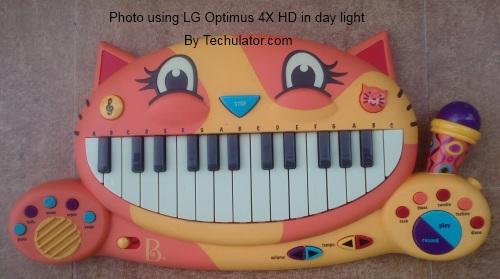 I am very impressed with the Panorama photo feature. Even though it is not a new technology, not many phones and cameras has an option to capture the picture in panorama mode continuously without repeated clicks. You click once and the 4X HD take over you can take the picture left to right or right to left and there will be an indicator at the bottom of the screen with the amount of the area you can save in a single Panoramic shot.

NOTE: If you are going too fast the device will give an "Alert message : Too Fast" denoting that the user has to scroll at a gradual slow speed. There is a limit for taking a Panoramic image which will be indicated by the progress bar at the bottom which appears after you start capturing the image. It will start recording the picture from that angle. You move your camera slowly to cover the whole area you want to be captured and then release the shutter. It may take few seconds to process your pictures but at the end you will have a nice panoramic photo to share it with friends and family. Here is a photo I shot using the 4X HD phone in Panorama mode:

Zoom options are at your fingertips and works very well. All of the camera settings in the 4X HD can be accessed from the touch screen and is very easy to figure out and operate. The volume controls doubles as camera shutter button which will make it easy to pause and continue while recording videos. Another feature in the phone is the "Time Catch shot" where the user can make a video and simultaneously capture still images at the same time.

LG has introduced some interesting features with the cool video playback application in the 4X HD smartphone. When the video is playing, you can zoom-in or zoom-out of the video without any Interruption while the video is being played. You can even pause the video and do the same without affecting the HD video quality.
Watch a short video that shows the video and picture qualities of LG Optimus 4X smartphone:

The Phone in 4X HD
At the end, this is a phone even though it allows you to do a lot more. What I care most in a smartphone is, it must be a "phone". The phone works really great in Optimus 4X HD and I never had a dropped call in my few days of testing. Sound clarity is excellent and works well even with speaker phone.

With all top of the line features and stylish design, LG Optimus 4X HD is a great smartphone, all set to give a tight competition to the leading smartphones like Samsung Galaxy S3 and iPhone. LG has set the price correctly by making it below the price of Samsung Galaxy S3 price. With the release of this phone, LG has proved that they are in the right direction to get a strong hold in the smartphone market.

Read more about LG Optimus 4X HD in the official website of LG.

LEGAL DISCLAIMER: LG has provided me an LG Optimus 4X HD smartphone device that is to be returned after completing my extended review of the device. All the opinions expressed here are my honest personal opinion about the phone.

Finally LG has come up with a good phone that can compete with Nokia and Samsung Galaxy. But how much they can compete with Samsung in the Indian market is yet to be seen. LG has to probably improve its marketing strategies to compete with the rest of the brands.

But overall article is awesome.