Cons: Controlling options are much terrible. In-game difficulty often ramps up during the gameplay. Actual variety in Gameplay of this game is too little and pretty unimpressive.

Yet another iOS game to review, Epic Raiders is a lovely RPG game that I would love to play with. Even I spend some hours for playing this game. Even I use this game to kill most of my boring time. Let us review this game and check out the interesting features, specifications and other options that has been delivered along with this game. Are you ready for a real epic battle? Come let us have some fun. 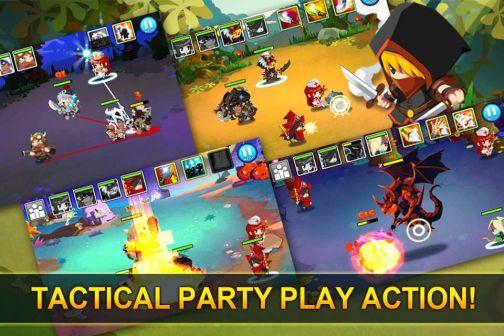 Epic Raiders, though the title mentions 'Epic' but don't believe the game to be that great, as it does not looks to be much epic. Epic Raiders is a RPG game, which has been developed exclusively for iOS devices. The game provides a great option for arena battle where you can play with parties that has been formed by you, your team will hold up to four fantasy archetypes. Using your team, you have to battle against the evil monsters. As the game features a 2D battlegrounds, which can be played on the single screen of your device, you will feel a great visual effects along with pretty awesome graphics which are sharp and colourful. Music and other sound effects, which had been packed along with this game also make it much more impressive.

From the first glance itself I felt Epic Raiders to be a pretty good game. The game also features interesting characters. The stylish and cute design that have been given to this game is also another noticeable feature for Epic Raiders. While we look into the gaming controls of Epic Raiders, we will come to know that they are highly impressive with simple and intuitive way of controlling options. We can also see that, the game features a tons of variation to the battlegrounds and it allows its players to explore more fun by playing player vs. player combat through network dungeon. 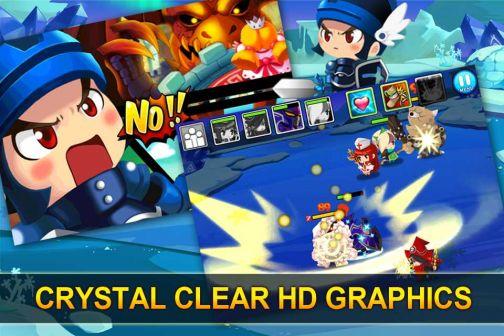 Epic Raiders also delivers character classes of eight different types, you can now easily go through each characters starting with stalwart Knight, faithful saint and even more. Each of these characters will have a health bar, attacking and defending powers. You will have to select your character wisely by considering rating for each section. The characters will have a particular area in which they are specialized the most. For easy understanding, some characters may have more attacking power, but will be holding very weak defensive power.

Now let us go further deep into this game and find out the ways to control our characters. There is no need to panic, as the controlling options which has been delivered in this game is much easier and user friendly one, as I mentioned above. By just touching them at the top of your iPhone device, you could control your avatar. There is also great options for moving your character or making them hit on any object on your desired direction, by just touching and dragging them. Apart from the default combat, you can pick your own new set of skills by progressing more forward in the game. There are even more options for you to make your battlefield even more dangerous with special unique equipments, that you will get from the game as you progress.

Although I liked playing this game at the very start, eventually I lost the interest. Are you curious to know about the reason behind it? Okay here goes the problem that I came to face in between playing the game. The most irritating problem for me in this game is nothing other than the control scheme. Even though I am pretty expert in handling two characters at a time, but it feels more tiresome work to equally control more than four characters at a time. It will be resulted in a large messing up into a sword swinging jumble. I cannot understand why the developers of this game could not sense out this problem while developing the game. But the controlling options or controls, which includes touch and drag over the screen, are pretty much impressive for all the players. You can even select your target by touching over your desired target, but this feature too feels much tough when the enemies are being overlapped together.

Strategy is the main theme for this game. Epic Raiders is a great game, if you keep some of the most disturbing cons apart. I would strongly recommend to all the iPhone gamers to have this game. This game will definitely blow your minds off. Enjoy the unlimited fun on your iPhone with Epic Raiders.

Read this article to know about the multiplayer (MMO)game Divina and know the pros and cons of the game. Know what the game Divina is all about and what are the features of this game. Read the release date and watch the preview trailer of Divina game

Super Mario has been wonderful joyous game from the day it was first launched. Read this review to learn more about this game.

Read this review of the Facebook and Apple iOS game Pet Vegas along with it's gameplay and other features of the game explained.