Pros and cons of Slydris game
What I liked
I liked the concept of the game which has lot of difference. There are many things which are different in this game. The effects which added in this game are little different from the effects games of its own niche. The fun which comes while planning this game is also very nice.

Where it is lagging
Slydris game lags in graphics and other things like detailing of the game. The game could have been better if some more changes like blocks can be made little more looks appealing. They look as if they are filled with neon light and projected right in front of us.

Ratings of Slydris game
Game is good for endless fun but it will diminish if you played this game for long time. Game scores a score of 7 out of 10 in our test.

Have you ever played a game called Tetris of Bejeweled? Well, these are the games which taught us how to play the building block games. Today the game which we are going to discuss is the named as the Slydris. In this game you have to join the different colors blocks to form a collapse. So the concept is same or we can say that 'shoes are same but socks are different'. So let's discuss the game in little more details.

Games start good when we love the starting graphics of the game and that's what the makers of Slydris have targeted. Slydris has very good visuals to focus on and that what is the most important and interesting part of this game. The game is very simple in its approach. Now we will talk about the game in detail, to cover whole game story. The game is all about how you join the different blocks which are present in this game. There are three types of blocks in Slydris. One is small, medium, and large. The large one consists of the three squares. All the blocks are in the horizontal positions. There are of different colors and you have to match the blocks to decreases the height of the blocks collected. If you are not able to make any triplet of same color then you will lose game as the block will keep on accumulating. The main screen has been kept very simple which will show your points and the progress level. With increasing levels the difficulty increases and the speed with which the blocks come also increases. In every ten seconds the new bunch of boxes fall part. 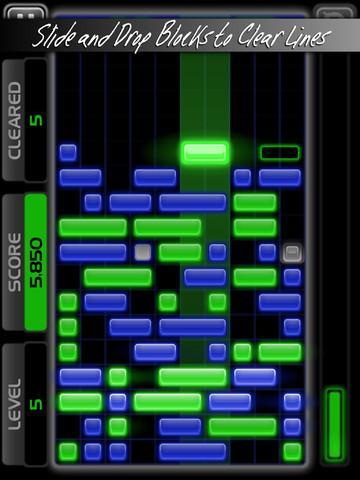 In Slydris game you have to make the same patterns to make more points. So for example if you are getting a box of one square and it is having the same color as the one lying below will make collapse and will give you points when you are done with making same patterns.

How Slydris is different from other games

The user interface of Slydris is in the moderate category. The game detailing is good but there can be more detailing which can be added to this game. The graphics and the effects can be made better.