Pros and cons of ORC Vengeance game
What I liked
I liked lot of things in this game. First of all the game has very decent features with good graphics, game play, story and character play. The game does not lack any where in any stream.

Where it is lagging
I don't how to write about this as I don't have anything to write but yes if on screen option can be increased then it will be very good.

Rating of ORC Vengeance game
Game is very good and scores 9.5 out of 10 and can be ten depending on your play experience.


One of the best parts of the iPad apart from the hardware is that it has decent collection of games on its application centre. I always liked RPG games and the game which justified this title was Wolfenstein or you can say the Call of Duty. But in the recent time I was using my iPad and found a new game called as the game ORC Vengeance. The graphics and the whole game play is superb in this game and the effect which are present in this game are also very nice. So let's see more about this game as we go down the page. 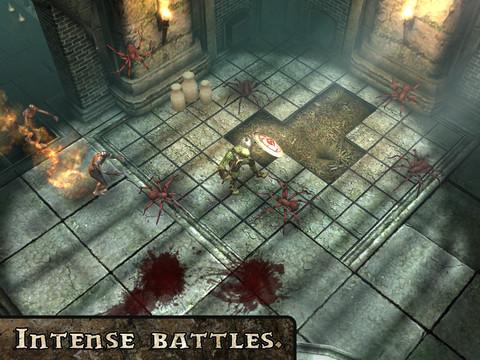 Have you ever played the game named Diablo? If yes then you will be going to enjoy this game a lot. The whole setup of ORC Vengeance is to kill the demons, zombies. When you will kill them it will give you points. But when they will be killed they will leave behind gold coins. Now what to do with these gold coins? The gold coins are used for buying the extra powerful weapons. The whole effects of killing the demons and the running of blood are very nice. The game is not good for children's who are below the age of 10. Now talking about the game, it is all about improving the strength and the stamina of your character. In the coming levels the demons and the zombies becomes stronger. You will get lot of other items too when you will kill your enemies. You can sell all these articles to get money and buy something good of your choice. There are other things which are present in this game like when you tap the screen your fighting is different and then if you swap the screen then you have different actions. So on a whole the controls of ORC Vengeance game are very nice and they are accompanied by good graphics.

You are a very strong character in this game, you have to kill various leaders in every level and you will get reward, you have to upgrade to various weapons and strengths.

How ORC Vengeance is different from other game

If you compare this game with Diablo then you will find lot of similarities but when you compare with RPG then it is a whole different game. The game is very different in its approach and the whole graphics with music are also very unique. The set of levels which are provided in this game are highly appreciable. The controls of the game are also very cruising and very accurate as compared to other games.

What about the user interface of ORC Vengeance game