HP is well known for its best featured Ultrabook and Sleekbooks in laptop market. In continuation to my earlier post Upcoming Best Windows 8 laptops from MSI on Windows 8 best laptops, this time I am going to explore specs and features of HP's Best laptops 2012. These Envy series sleekbooks from HP are Windows 8 upgradable with two models differ in respect of their type of processor. Both the models of Envy series runs on Windows 7 operating system and capable to upgrade to upcoming Windows 8, embedding a number of smart technologies like CoolSense technology, HP Protect smart technology, dual speakers and Best Audio. The machines also show long battery backup and multiple connectivity options like USB, HDMI, Wi-Fi and many more.

The first HP Envy series model is 14-inch Envy 4-1010us sleekbook with third-generation Intel Core processor providing many Intel technologies to the system.

The least priced Envy 14-inch Sleekbook among all the ultrabook and sleekbook laptops from HP is 19.8 mm thick and features 14-inch screen and 3rd-generation Intel Core processors, Windows 7 Premium OS capable to upgrade to Windows 8, eight hours battery life having HP Protect Smart and CoolSense technology with HP True vision HD Webcam. The 14-inch Envy Sleekbook is one of the best laptops from HP. The machine has metal-built body and with having Intel's processor, the device embeds many Intel based latest technologies and shows good connectivity features.

In addition, HP Envy 14 Sleekbook machine boasts of standard 14-inches multi-touch display with 1366 x 768 pixels of screen resolution and a also having a HP TrueVision HD Webcam that provides remarkable user experience even in low light and has HD port too for streaming video to your HD TV using Intel Wireless display.

The slim and light weight 4 pounds machine is measured to 19.8 mm in thickness and having Beats Audio and dual speakers with a subwoofer, HP CoolSense technology and HP Protect Smart features.

The HP Sleekbook is running on Windows 7 Premium 64-bit operating system that can be upgraded to upcoming Windows 8 after release on Oct-26, 2012 and encompasses Intel core_i3_2377m Processor running at 1.5GHz (3MB Cache) that is coupled to 4GB DD3 RAM 500GB of HDD storage with Intel HD Graphics 3000.

The least priced Envy 14 sleekbook among all ultrabook and sleekbook is available at different prices at different online stores. Some of them are as below:

Cons:
The device has sluggish performance, has screen door effect on display, fingerprint magnet, has low screen resolution display and loaded with bloatware. 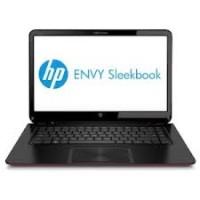 The 15.6-inch Envy Sleekbook is among the Best laptops 2012 released by HP. This HP laptop 2012 is built-up with metal body and is a AMD Processor laptop running on Windows 7 operating system upgradable to Windows 8 laptop later and show long battery backup up to nine hours.

The Envy 6 Sleekbook runs on Windows 7 Premium 64-bit operating system capable to upgrade to Windows 8 after releasing on Oct 26, 2012and embeds AMD Dual-Core A6-4455M Accelerated processor that runs at 2.6GHz/2.1GHz coupled to 4GB 1600 MHz DD3 RAM and 320GB of HDD onboard storage.

Pros and cons of Envy 6-1010us Sleekbook

Cons:
The HP Envy 6 sleekbook has less HDD storage than other HP sleekbooks and ultrabooks. The device also shows screen door effect on display, screen resolution display is low and loaded with bloatware.