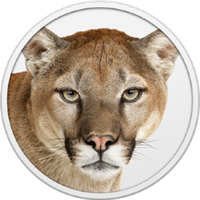 Mac OS X 10.8 Mountain Lion can be bought at the Mac App Store as an upgrade to Snow Leopard or Lion users at a price of $19.99.

Apple has announced that OS X 10.8 Mountain Lion downloads have crossed 3 million in just these 4 days which has made it the most successful OS X ever released by Apple.

Here are some of the important OS X 10.8 Mountain Lion Features :

The Mac gets its own version of iOS's Notification Center. In iOS, you pull it down from the top of the screen; in OS X, you use two fingers on your Magic Trackpad to swipe in from the right edge, sliding the desktop a little to the left to reveal it.

The VIP feature from iOS 6 also comes to OS X, so you can ignore (or switch off) the incoming Mail sound, but still keep an eye on important things. Messages from your chosen 'VIPs', along with other notifications, appear in a banner at the top right of the desktop, a lot like the Growl system used by some Mac apps.

If you don't click on a banner, it disappears off the right side of the desktop and sits in Notification Center until you have time to deal with it. Notifications can be set to appear as alerts instead of banners, which stay on screen so you don't forget about them. If you don't want to be bothered, a switch at the top temporarily disables alerts.

In fact, Mountain Lion provides plenty of opportunities to share from apps. That might mean putting an image from iPhoto or Preview on your Facebook wall or tweeting a link to a web page from Safari.

It's even possible to share a file from the Finder's Quick Look without using an app.

Absent from the Mountain Lion announcement in February, this feature comes from the new iPad, which has been making do with it until iOS 6 brings it Siri. Siri isn't in OS X 10.8, but Apple said it would 'bring dictation to the Mac', although you'd need to buy a microphone to use it with a Mac mini or Mac Pro.

Wherever you can type text, you'll have the option of speaking it instead. It'll work in Word, but other third-party apps remain to be seen.

Mountain Lion apps are provided for Reminders and Notes, rather than tucking them away in iCal and Mail as now. If nothing else, this provides consistency between iOS and Mac. The Mac version is location- aware, too, so it can remind you about work tasks once you get to the office, say.

The Messages app, previously in beta for OS X Lion, will benefit from Apple's move to tie your iPhone number to your Apple ID - so iMessages sent to it will be received on Mac and iPad as well, maintaining conversations on all your devices.

Documents in the OS X Cloud

Apple previously intimated that it would update its iWork apps with the ability to store documents online and have them synced to all your devices. This time it showed this in action and revealed that the same facility would also appear in some of OS X's built-in apps, including Preview and TextEdit. Third-party apps can make use of an API to achieve the same.

But, as in iOS, OS X 10.8's iCloud documents pane seems to appear in each app as a small window containing a grid of icons. There are options to switch between documents stored in iCloud or on your Mac, and a Spotlight search bar to filter out things you don't want to see.

But there's no sign that iCloud allows documents to be organized properly into folder structures to keep tabs on them by project or some other custom scheme.

It all looks deceptively simple in Apple's demos with, say, nine documents, but what if you have 90, or 900?

Putting a document in the cloud is as simple as dragging it from the Finder into the appropriate app's opening dialog. It then becomes available on your other iCloud-connected devices once they have an internet connection. It's unclear if it would be possible to work with the same document in the cloud using multiple apps.

We can expect chest-beating performance claims for Safari, and once again Apple boasted that its JavaScript performance was faster than every other manufacturer's latest browser - although the graph used to illustrate this implied the difference was pretty marginal. Beyond number crunching, Safari gets a bit of a shake-up in features and appearance. 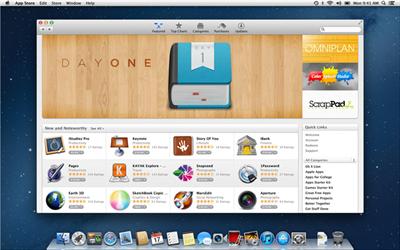 The address and search bars have been unified, so you can type either an address or search terms into a single bar. Odd, then, that Apple has waited so long to adopt it after other browsers.

As a companion to your iOS device, the OS X 10.8 browser, Safari supports iCloud Tabs. Click the cloud icon in its toolbar, and tabs that were open on your other devices are listed, so you can carry on reading there.

Tab View switches open tabs to a graphical view, which are swiped through with gestures on a multi-touch trackpad or mouse. The view is invoked by pinching to zoom out. Apple has re-implemented scrolling of pages using its Core Animation technology, which it says will bring smoother scrolling.

Another previously unannounced feature, this keeps your Mac in a low-power idle mode that allows it to update your Photo Stream, email and other features, back up via Time Machine, and download updates from the App Store and Software Update.

Besides saving power, Apple claims Power Nap works in silence, so you won't be disturbed by your Mac's fans spinning up. But it only works with MacBook Airs released in late 2010 or later and the new MacBook Pro with Retina display, all of which are exclusively built around flash storage.


The facility to send your iOS device's screen to an Apple TV - to play games or watch iPlayer on the TV or projector it's connected to, say, is now available on your Mac too.

An icon in the menu bar lets you choose an Apple TV on the same network, to which AirPlay mirrors the Mac's display at up to 1080p.

Audio can also be sent to AirPlay speakers. This feature works with second- and third-generation Apple TVs and requires a fairly new Mac: only models introduced since 2011 are listed, and there's no mention of the Mac Pro, even with its slight WWDC processor update. AirPlay won't work the other way round) so you can't use your 27in iMac to mirror your iPad display; it only outputs to Apple TV.

More than 130 million people use Game Center to track achievements in iOS games. Now it works in OS X as well, and supports cross-platform gaming with iOS, so players on the two platforms can go head to head in compatible games in real time.

Thanks to the unified development environment for iOS and OS X, and the many technologies the two have in common, popular games such as NOVA have already been released on both, and a few, such as Real Racing 2, allow cross- platform multi player games - but with Game Center doing the heavy lifting, this should get more common. Friends on either platform can invite you to play, which triggers a notification on your desktop.

If you ignored OS X 10.7 Lion, but are now tempted by its successor, there's good news:
as long as you've updated to version 10.6.8, you can go straight from Snow Leopard to Mountain Lion when it appears.

As always, make sure you've got a complete backup of your Mac before upgrading. A full Time Machine backup is ideal, allowing you to roll back to a previous version of OS X if you discover any show-stopping problems - not that this should normally happen.

Apple has published minimum system requirements for OS X 10.8 Mountain Lion , and made it clear which models are required for features such as Power Nap and AirPlay. Mountain Lion requires one of the following Macs:


You'll need at least 2GB RAM and 8GB free disk space. A single £13.99 purchase can be installed on all your personal Macs. The only place where you can buy OS X 10.8 Mountain Lion is the Mac App Store.