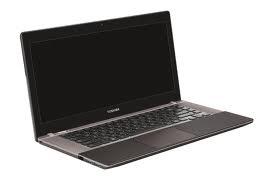 Toshiba recently introduced its Toshiba Satellite U840W, the first ultrabook with a theater-like 21:9 aspect ratio. This Satellite U840W 21:9 display has a resolution of 1792X768. With its excellent resolution & display, it is well suited for watching movies. Considering the high-end features of this ultrabook, its market price is also high.

The U845W's LCD is 14 inches when measured diagonally and its wide & shallow dimensions give it a compact footprint. The stylish satellite U840W has Hollywood starlet's waistline (20.8mm), brushed metal finish work and weighs about 1.814kg (depending on the chosen configuration).

This Satellite model is powered by Intel core i5-3317U. Its normal core frequency is 1.7 GHz. Its modern chip is a member of Ivy Bridge Intel Core Processor generation. It has USB 3.0 connector, HDMI out, headphone, microphone, Ethernet and multi card reader connector.

It comes with Microsoft Windows 7 Home Premium with 64 bit processing speed. The battery is based on Lithium-Ion. Webcam and keyboard backlit are some other features.

This unit has a fast Ethernet LAN port (10/100), standard WLAN 802.11 b/g/n and Bluetooth 4.0. It has Intel Wireless Display compatibility. The built-in webcam for video conferencing is of average quality.

The laptop is stylish and slim with 20mm thickness. Its soft touch ensures comfortable typing. One part of Toshiba Satellite U840W has rubber-texture coating while another part is brushed with aluminum. The overall look is very attractive.

Due to its elongated shape, the resolution of 1792 x 768 is unique. This model allows the screen to be tilted back to up to 140 degrees. The U840W does not feature a locking display, the hinges present help to close the notebook.

The Satellite model U840W has a battery life of 8 hours.

The 15x13 millimeter keys are a bit smaller than those in the normal Chiclet-style keyboards. The keyboard is visually pleasing. The function keys are in second row of keyboard. The upper row is meant for multimedia functions like volume adjustments, brightness, WLAN and video play.
The 10X6.5 centimeters (3.9X2.6 inches) touchpad of Toshiba Satellite U840W acts as a click-pad as it has no left and right mouse buttons. To actuate a click, you will have to apply a bit pressure.

• It has a slim and stylish design.

• Its theater-like 21:9 aspect ratio gives you a clear view of widescreen movies without any black bars.

• It has a good battery life.

• The touchpad is bit disappointing.

If you are planning to buy Toshiba Satellite U840W ultrabook, let me tell you the device will be on sale from third quarter of 2012.

This article describes about the new technology used by Toshiba in the ultra book. Toshiba is going to release their four ultra books in October which is Satellite based and these are showcased with Windows 8 operating systems.