Here is some background on "Aakash tablet", if it does not sound familiar to you. Aakash tablet was an ambitious project by the government of India to give tablet computers at the price of $30 for students in India. Government chose a company called DataWind to produce and distribute the Aakash tablet. This project got worldwide attention due to the low price for a tablet computer. However, DataWind failed to deliver the product in a timely manner. Due to the poor quality of the product and low specification, Government moved on with the next phase of the project called "Aakash 2".

Later DataWind discontinued selling Aakash tablet. It is unknown whether anyone has actually received the Aakash tablet in hand. You can see hundreds of reviews of Aakash tablet, but I believe all of them are written by reading the specification of the tablet and not really hands on review of Aakash tablet.

I booked a UbiSlate 7+ tablet in January 2012. In fact, I made several bookings in the past but there was no response from the company for any of those bookings other than the company claiming it has received several million orders for the product and they are setting up many manufacturing plants to meet the demand.

By the time I placed an order, people had started feeling something bad is going on with Aakash tablets. However, the middle class people in India who dreamed of getting a computer for Rs 2999 were not discouraged seeing such reports. After I placed the pre booking order, I sent a demand draft to DataWind based on their advertisement that they will be delivering the product to the people who make the payments in advance.

After I sent the money, in the subsequent months, I kept on trying to contact them through email and phone, but failed to get any response from them. For about 7 months, I did not hear anything and I lost confidence that I would ever the product which I already paid. One of my aim was to write a hands on review of UbiSlate 7+ and share the information with the rest of the people in India so that everyone will get an accurate picture on how good is the tablet PC.

I sent multiple emails in the form of legal notice, but those emails were either bounced or were ignored by DataWind. 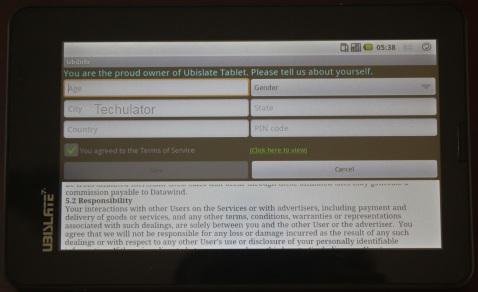 The UbiSlate came in decent box, wrapped with paper and proper padding inside the box. The box contains the following items:

UbiSlate 7+ was professionally packed and it gave us an impression that we have a great product in the packet. However, that feeling lasted only few minutes! 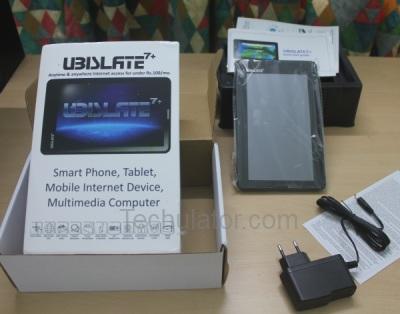 Finally I got the UbiSlate 7+ tablet in hand and though I would make a hands on review video so that I can share with everyone and help them make an informed decision about buying this tablet PC.

Here are my general reviews on the UbiSlate 7+ Android tablet PC I received:

DataWind took about 7 months to deliver the product after I made the payment. During their period, they never responded to my communication with them. I am very disappointed with their product support.

The product was wrapped well and is professionally packed. Good job, DataWind. (This is the one of the few appreciations I have for you!)

UbiSlate 7+ guided me to configure Wifi when I tried to browse a web page. I am not sure if this is a feature of UbiSlate or Android. But it was cool to get on spot assistance to get it configured. And the Wifi configuration was as simple as choosing the correct Wifi and entering the password.

However, I was terribly disappointed when I started using the product.

UbiSlate 7+ takes about 45 seconds to boot and get ready to use. When you press the button to turn it on, for several seconds, you will not even see any response on the screen. Once it start showing the screen, you will be staring at a screen that shows "DataWind" for about 5 seconds, another display screen that displays "UbiSlate 7+" for about 15 seconds. After that, another screen comes up that shows "Android" which stays for about 20 to 25 seconds.

This is the most disappointing part of the UbiSlate 7+. The screen is highly non responsive. You have to press your finger really hard and keep pressing, dragging and clicking to get any response from the device. It is almost impossible to type fast in the Aakash tablet since most of your key strokes will not be counted. Also, I noticed many times when I type on the virtual keypad, if I don't press in the middle of the key, many times it is taking it as another key.

The screen display does not appear the best in class. Obviously, I wouldn't expect it to be best for small money I paid. But I still believe for serious use, you need a better display, In direct day light, I could hardly see anything on the screen other than the reflection of the light.

UbiSlate 7+ is probably an embarrassment for Android! The device boots and responds to user actions extremely slow. You will probably lose your patience within a few minutes just because of the slow performance of this Android tablet PC. It is not Android, but is the slow processor on the tablet to blame for the slow response of the computer.

What is good in UbiSlate 7+?

I wouldn't say UbiSlate 7+ is not good at all. Even though it may not be a good option for serious documentation and business use, it can be used as your second tablet PC. For example, I have an expensive Apple iPad tablet which I do not want to use when I work in my yard. In that case, I would probably carry this Rs 2999 Tablet with me while I am outdoor and use it for quickly checking emails etc.

It could double as a phone, but I am not sure if I want to carry a big phone that will not fit in to the pockets. But it is a bonus to have a phone in this cheap tablet PC. After all, it costs just Rs 50 to buy a telephone SIM card in India and anyone could afford to buy an additional SIM and use in the device for emergency use.

GPRS and Internet in UbiSlate 7+

The primary difference between the original Aakash tablet and UbiSlate 7+ is, the latter one comes with GPRS and Phone support. For Rs 99, you can have internet on the go. The cheapest phone will cost you around Rs 2000 in India, but for a small extra money, you will get a lot more than a phone in UbiSlate.

Remember if you buy the government sponsored Aakash tablet, you will not get the phone facility.

Ease of use and friendly guidance for initial setup

Thanks to Android, the device is not very complicated to use. Just like the Apple iPad, this unit has a power button on the side and a Home button in the front bottom. Most of the physical operations as well as soft operations are quite obvious if you have used any tablet computers in the past. (Once Windows 8 tablet comes out, you will find it a lot different!)

There were online assistance during the initial setup. For example, when I tried to browse, it guided me to go to the proper screens to setup Wifi. I could see other online guides in other screens also.

Conclusion: Is it worth buying Aakash tablet or UbiSlate 7+?

Here is my conclusion: I will not recommend UbiSlate 7+ or Aakash table for any serious use including educational use for students. This device is very slow and poor performing for any serious use. However, I would recommend this product for small kids to play video games and also for adults to use as a second tablet computer for browsing or playing while they are outdoors. If you are looking ofr a really cheap tablet PC and don't care about performance, you can go for UbiSlate 7+.

Aakash Ubislate 7 - The cheapest tablet available in the Indian market

Akash Ubislate 7 is known to be the world's cheapest tablet available so far in the market. Aakash is creating a new revolution in the tablet market. We are providing you the link to book your Aakash tablet online and to make all queries related to the tablet. Read the below article to get more details.

I am very happy to see a free and frank review.I also received
recently the unit and also in the process of understanding various features.I am happy that the unit was supplied for a price of Rs 3000/- when many are sold for higher prices.But for a general user this is good enough and satisfies the requirements of students,adults, in villages,towns,cities in India .I must congratulate all who finally brought out a commercial product.In future we can expect many more improvements for the same price.It would have been better if the unit has been give with keyboard case.

This is a review from a United States customer, whose mom is in India, who ordered this crappy shit unknowingly. It is a project backed up for making money by taking it in well advance from the customer putting in their own bank account and earning crores of rupees interest. Indeed a fraud company. I will definitely prepare legal documentation against DataWind and its team of **cking customer care representatives who participate in company's fraud.

Ordered ubislate in somewhere middle in June 2012. Nothing delivered till now and emails are not being responded. F**king customer care number 1 800 180 2180 always comes switched off. And the most annoying thing is when call got connected in the technical department, three f**king CSR's hung up the phone on my face. I told the fourth f**ker who picked up my call. His name is Narender that don't hang up the phone as I call from USA and not from local India where call costs are in paisas still. They f**king don't understand the talk or language. He said his manager is not there and he doesn't know his manager's name.

Shame on this company. Ripping of the people in name of cheap goods to be provided.

I will get them all soon. My promise... They know the Indian laws, I will teach them the US laws. Let their manager and owner read this article and if they have balls, then take action to refund my money or deliver the product asap or else wait for my papers to reach there all the office listed on their website.