Difference between Mircosoft Tablet and iPad

Microsoft surface tablet is going to be released in two different version. 'Windows (RT)'/'Surface' and 'Windows 8 Pro/Surface Pro'. The Surface/Windows RT will be equipped with Nvidia Tegra based ARM chip while Windows 8 Pro will contain Intel third-generation Core I5 processor. Thus, Surface is having low speed of around 1 GHz or 1.2 GHz compared to high speed of Core i5 processor having 2.5 to 3.5 GHz process speed. While iPad will be having Dual-core Apple A5X dynamically clocked processor having maximum clock speed of 800 MHz to 1 GHz.

Thus, Mircosoft Surface Pro tablet is better than iPad in terms of processor and its speed.

Size Comparison between Tablet and iPad

Surface and Surface Pro tablets will be having thickness of 9.3 mm and 13.5 mm respectively. Surface and Surface Pro will be having 676 g and 903 g respectively. While iPad is having thickness of 9.4 mm and 652 g weight. Thus by size, one can understand that iPad is light in weight and slim. So, iPad wins the race in size portability and handling. 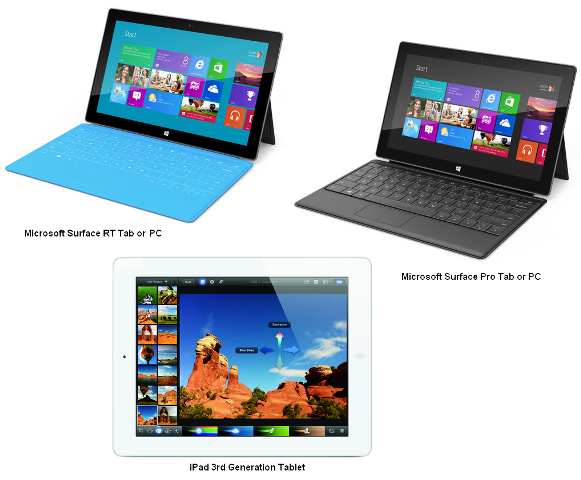 Surface and Surface Pro tablets will consists of display screen with 10.6 inch clear type and will be of HD technology but iPad is having 9.7 inch Retina type in display category. Thus, resolution of 1280x720 for RT and 1920 x 1080 for Pro tablet and 2048x1536 for iPad third generation.

Though smaller in display size but by screen resolution iPad is better than microsoft tablets.


Comparison between other features

Have a look at the table shown below and compare the other features. 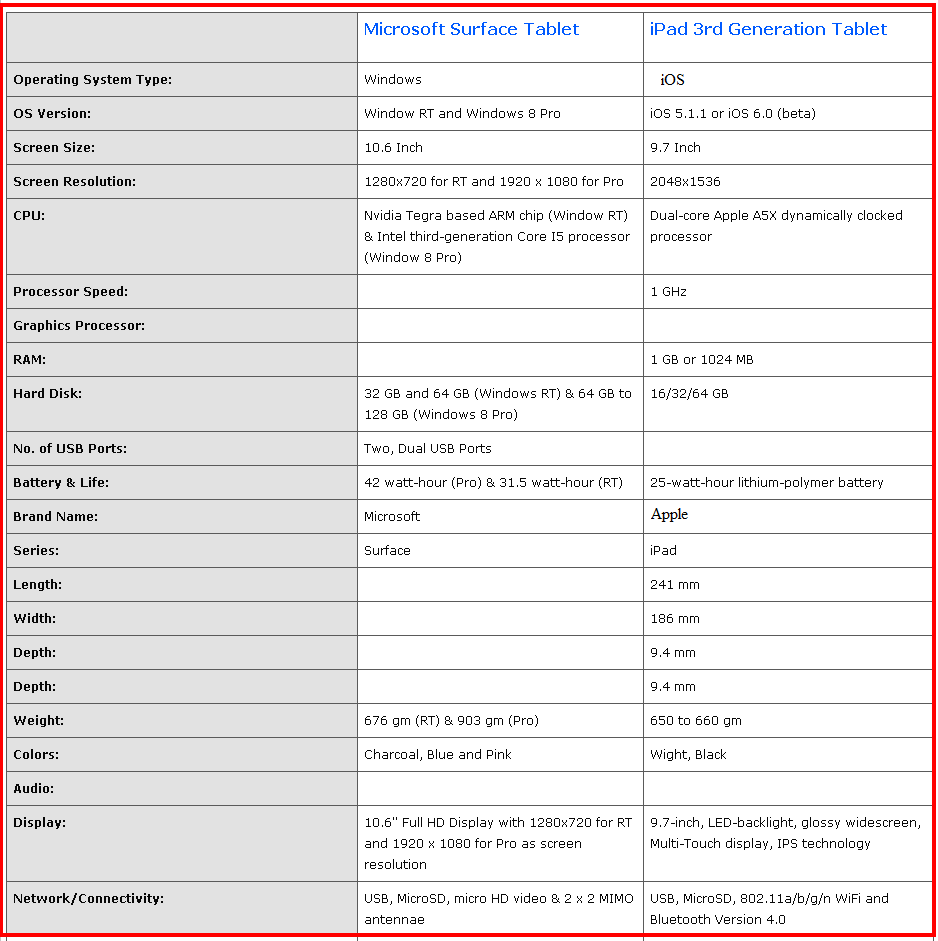 Conclusion: Microsoft Surface may be better than iPad

From the above comparison, I would like to give more marks to Microsoft Surface tablet because of higher speed of processor. Second plus point is that it will be also used as tablet-cum-computer. Microsoft tablets will be having USB ports that will add more connectivity compared to iPad having no USB port. Windows OS will be having more features compared to iOS.

Read about best Windows 7 Notebook PC's available in the market along with detailed features, pricing and specifications.

HP Ultrabook 6t-1000 is the latest ultrabook by Hewlett Packard. Read this review to know more about this ultrabook and it's specifications and features.

Chromebook Pixel hasn't been a hit for Google since it's launch. Google has upgraded the laptop a lot. With the new Chromebook pixel it introduces a new industrial look and an astounding display. This article tells you about Chromebook pixel and its features. Read to know more...