ACi(Allied Computers International) the reputed UK-based computer specialist brand and it was established in India in May 2002. The ACi(Asia) announced the first cheapest laptop and named it ACi Icon 1100 Laptop which is a high-resolution laptop with 10.2-inch screen. The lowest price laptop is windows-compatible laptop computer along with 1 GB of expandable memory. 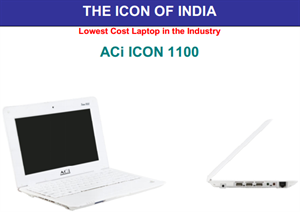 On 27th June 2012, ACi unveiled the first super low cost laptop called ACi Icon 1100 in Indian market and it is expected to arrive in market from August 2012. Introducing such low price computing devices in India is really a very great news. Indeed, India needs low costs computing devices like other country. At least, Such kind of computing devices will bring smile for the millions of Indian who can't afford the laptop of budget 40-50K. The ACi also announced that they are willing to sell 200,000 low cost ACi Icon 1100 laptops in the first year. So it is important for you to Book your device online as soon as possible, If everything goes well then we'd be really surprised and our computing life will be awesome.

Aci's India marketeer Allied Computers International's (Asia) Mananging Director Hirji Patel said "We have launched India's super low cost laptop at Rs 4,999. It will be real fully functional, Windows compatible laptop, at the lowest price tag in the country," Of course, There is no any laptop manufacturer who can low down the price of laptop up to this level. And that's why ACi's Icon 1100 Laptop has become the cheapest laptop in India. For specs and features of ACi Icon 1100 Laptop just have a look at the image below: 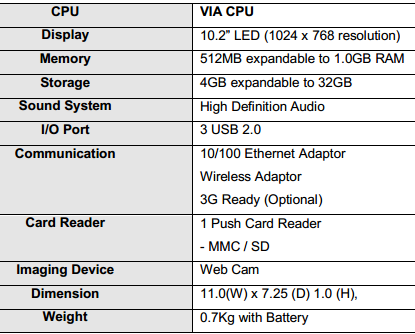 I would personally recommend all students to go for this laptop as it is cheaper and being a students I can understand the money matter of students. Internet is the huge resources of anything we want, I am sure this device wouldn't support the best gaming feature but I am sure it'll make you smarter and better if you really use it positively with the intention of learning. I really wish that other giant manufacturer should also come up with some new offers and price rate instead of attractive promo and high price.

Allied Computers International (ACI) launched India's cheapest laptop ever. At Rs. 4,999 this laptop is priced at an unbelievably low price. This is truly a laptop of the masses, that is if this laptop can stand its weight and function properly.

Are you looking for one of the lowest priced laptops in India? This review from a savvy mom who is always on the lookout to save money, will help you find the best lowest price laptop available in India today.

Are you planning to buy any new laptop or notepad or Tablet? If yes, Just think for a while and be smart to buy it. Avoid spending unnecessary money for costly laptops if you can have a cheaper laptop and you can get to do all you wish to do. I have some solid reasons why one should buy a cheaper laptop.

Looking for cheap and best HP laptops in the range of Rs 20,000? Then just go through this article which gives all the best and cheap HP laptops. I have also mentioned about specifications and other features related to each laptop.

shall i cancel my order ? i ordered 35 days back. still no response. i`m from andhra pradesh. kartheek.