Tablets are the demand of the present scenario. Right from tech savvy people to the common person tablets have gained popularity and its graph is ever rising. With its increasing demand various companies have come out with power packed features at affordable ranges to popularise its demand amongst the common mass. Here is a list of top ten cheap tablets available in India available below range of Rs 10,000.

Aakash is the cheapest tablet in India available at a mere price of Rs 2500. It was developed with the view of educating the school students in order to adept themselves with the tablet technology which is swaying the world today. Its specifications include the Android 2.2 operating system> as its platform. It has a RAM of 256 GB and 32 MB expandable memory. It also has Wi-fi and comes with a warranty. However, one cannot make calls with Aakash.

Ubislate 7+ or the Aakash 2 as most popularly known is the next cheapest tablet available at a price of about Rs 2999. It is called Aakash 2 because of its enhanced features with respect to Aakash. Its specifications include Android 2.3 operating system with 256 MB RAM. It is also embedded with Graphic Accelerator and HD video processor. It comes with an internal 2GB flash memory. It also supports GPR and Wi-fi. Additionally one can also make call from it.

BSNL Penta TPAD comes at a price of just Rs 3250.Its specifications include Android 2.3 Operating System with 256 MB RAM and a 1 GHz processor. It is one of the best price performance tablet available in the range.

Magnum Pepper is actually the first cheapest Tablet available in India even before Aakash. It was priced at Rs 4500. Its Specifications include Android 2.2 operating system. It has an inbuilt 256 GB RAM and 4 GB internal storage memory. It also supports 3G and Wi fi feature. Additionally it has a front camera. 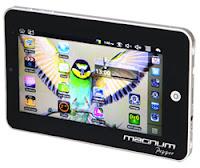 Micromax funbook comes at a price of about Rs 6499. It is specially designed for the students for their experience on learning and using tablets. Its specifications include Android 4.0.3 Ice cream Sandwich operating system and comes with the flexibility of up gradation to other Android versions. It has an inbuilt 512 MB RAM and supports 3G and Wi-fi. Further, it has a battery backup of about 5 hours.

Wespro ePad is also in the list of the cheapest tablets available in India at a price of about Rs 7000. Its specifications include 256 GB RAM supporting 3G and Wi-fi. However, at lesser price we can get more features nowadays and so I think it's better to go for some tablet where more features at relatively cheaper price is available. 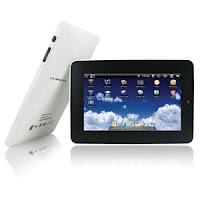 Binatone Homesurf comes at a price of about Rs 7999. Its specification includes Android 2.1 operating system. With a 7 inch resistive screen supporting 256 MB RAM. It has 2GB internal storage memory along with micro SD storage for additional storage.

Zync Z-990 again is a cheap range tablet at around Rs 8500. Its specifications include Android 4.0 operating system with a 1.2 GHz processor. With a 7 inch Multi touch displays supporting a 1GB RAM.

Mercury mTab comes at a price Rs 9499. It specifications include Android 2.3 operating system running on a 1.2 GHz triple core processor. It has 512 MB RAM, 4 GB internal memory capable of expandable memory up to 32 GB.

Beetel Magiq is priced at about Rs 9999.Its specification includes Android 2.2 operating system with 512 MB RAM and a processor of 1 GHz.

Are you looking to buy a tablet and your budget is under Rs. 10000, then go through this article and get informed about the top 5 tablets in India priced under Rs 10,000. This article describes each tablet briefly covering almost all important aspects that would be adequate enough for you to choose the best among these top 5 Tablets available in the Indian market.

Affordable tablets from MTNL - A guide

As the low cost tablets are being released by many companies, here is another cheap and low cost tablet which is released in India by name ATab. This ATab is Android based tablet which will be the attraction of people. So read this article to know the features and specifications of this ATab.

Review, price and specifications of Zeepad - the cheap tablet PC in USA

Are you always wishing to add a Tablet PC in your list of owned Gadgets? If so, then here is the Zeepad; claimed to be one of the cheap Android Tablet PC available in the USA. Read on to know price, specifications and reviews of the Zeepad. The coolest Gadget Zeepad ships to all over the world and can be bought at Amazon for just $60.Take a look at the features.