I wonder, One day I may have a gadget(Smart Phone) called XXX manufactured by BMW and I will be driving the Car model YYY manufactured by Google(Just kidding, I'm a Google fan). Really, It surprises me that Amazon.com one of the largest e-commerce web portal on this earth launching their Tablets. The Father of Windows also started manufacturing tablets. Though you can find many similarities and differences between the tablets manufactured by the three giants Google Inc, Microsoft Corp and Amazon.com. I personally think Google's Nexus 7 may win the race as they have the power of one of the industry leading mobile OS Android. By the way, It's always good for consumers cause now we can have three options: Nexus 7, Surface or Kindle Fire. 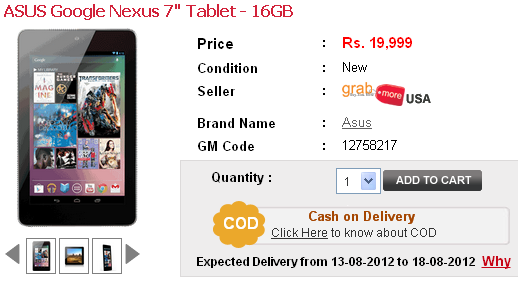 Unfortunately, We Indian don't have facility to buy the device in India right now. Officially it was announced by both the co-developers of the Nexus 7 Google and Asus that the device will be available in India after September that means in October. The question is, How to buy Google Nexus 7 tablets in India?

If you really can't wait till October then here is the good news for all Google fans. You can book the 8GB Google Nexus 7 as well as 16GB Google Nexus 7 tablets right now and it'll be delivered to you around 7 to 15 business days. Yes, the device will be imported all the way from USA to India. Grabmore is one of the top name and provider of many USA products in India. Grabmore has listed both the devices for Pre-order. 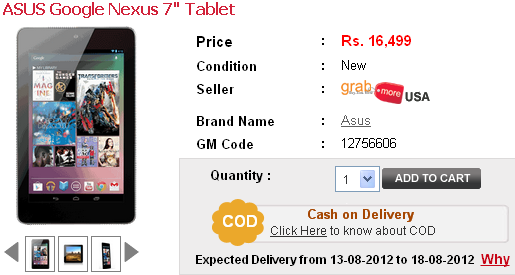 Price of Google Nexus 7 in India

To be honest, Grabmore doesn't charge very much as it includes shipping, handling, taxes as well as customs charges. Basically, It is a great deal for all Google fans who wants to experience the Google Nexus 7 tablet before October, 2012. If you can trust Grabmore then in August you can get your device after booking it now. You can use the URL to book it now: http://www.grabmore.in

We have seen specs, features and prices of Nexus 7 a lot, Really I like it. The leading mobile OS which has been the key factor of many successful mobile phones, is coming himself in its own device. Android latest version which is really amazing the Jelly Bean OS and it will be the OS in Google Nexus 7 too. And I heard that Jelly Bean OS has two new feature like the fast touch response and the notification section. Google Nexus 7 tablet is smooth, fast and of course affordable price as well. Specs says that Google Nexus 7 tablet has got average battery, good hardware parts with 1.3 GHz quad core Tegra 3 processor, a GeForce 12 core graphics processor, 1 GB of RAM, 1280 x 800 pixel IPS display, Near Field Communication (NFC) chip and more.

Now, You can decide whether to buy it through Grabmore or not? But still you have second way to buy the Google Nexus 7 tablet, and no doubt that is the good way so what it'll take time.

Bought the Nexus 7 from Grabmore and received the item. Thanks for information.