Till day, the year 2012, we have seen so many mighty companies out there, which have introduced so many great gadgets to the tech world. And among them, the role of Sony is not much small. We can say that, with the introduction of the Xperia series, they have grown even bigger and better. With the first Xperia announced in 2008, the saga still continuous, by the arrival of new Xperians and they have managed to make each one unique and better than the previous ones. Now we are expecting the latest one of the Sony Xperia series which is the Sony Xperia Miro. The Xperia Miro is one of the 3 phones that they have announced lately. It was announced on June 2012. 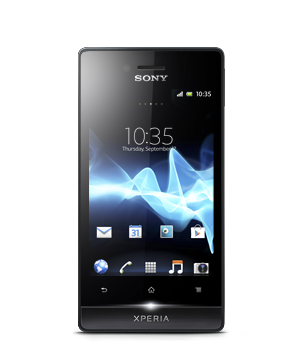 Like in any other Xperia phones, they have did their best in designing such a machine, which is totally comfortable for the user. By examining we can see that each thing in the Xperia Miro is so smartly allocated. The main thing is that it comes with a handy price, which is suitable for an average man and it has all the peculiarities that a proper smartphone should have. The thing that separates it from other Xperias is its light weight and the thin design. The Xperia Miro comes with a heavy accent on social networking at the same time it is an entry level smartphone with the latest Android running on it. It is also known as Sony ST23i.

The Sony Xperia Miro runs on the latest version of Android, which is v4.0.3, Ice Cream Sandwich. So being an Android, the device will not feel any kind of application shortage, that there is more than enough apps still on the Play store, and on each and evey moment new and new apps are getting added to it. The Sony Xperia Miro is powered by Single core Cortex-A9 processor, which is clocked at 800MHz. It is also loaded with Qualcomm MSM7225A chipset. The processor which is loaded in it is enough to run the phone in more speed that the user expected. It is also loaded with Andreno 200 GPU which assures better gaming experience to the user. It also enhances the movie and multimedia watch. Although the processor and the GPU loaded in it is not the best out there, it has a RAM of 512MB makes the device more adorable and smart. All these are still usefull in doing maximum works that a person can have through it. The device comes with a total of 4GB of internal memory, including the OS and free space. Among the available 4GB, only 2.2GB will be available for the user for data storage. It also comes with a microSD card slot which is expandable up-to 32GB. It offers a good option in case of OS, processor and data storage. 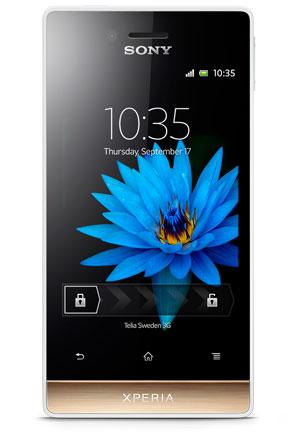 The latest Sony Xperia Miro comes with a comparable large display, which is about 3.5 inches. The display is made even brilliant with the Sony Moblie Bravia Engine, which give the user eye-poping display. The screen of the Xperia Miro is capacitive , LED backlit LCD type. It is loaded with 16M colours which gives more aggresive reds and greens in display. It offers out standing display, also because of high pixel density, which is about 165 ppi. It has a resolution of 320x480 pixels. The Xperia Miro is not provided with any Gorilla Glass Display, but the new Anti-Reflective coating gives the display panel enough protection. This layer gives protection like the Gorilla Glass and it also helps to disable reflection. The screen also supports multi-touch, which allows multi touch upto 2 fingers. Comes with User Interface TouchWiz v4.0 which makes it even more adorable. 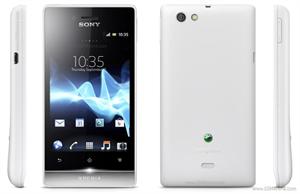 From the first look itself, we can say that the Sony Xperia Miro is so smartly designed for easy use. The new Miro comes with bright colours. The first thing is that , its slim and handy design. Is is so smartly designed that for better in-hand experience they have provided a rubber like feeling on the back. The device is an entry level one, and also it may have some drawbacks, but its pretty decent on the looks. On close examining we can see , on top, there is a power button and a 3.5mm audio jack. On the right there is volume rocker, on the left we can see microUSB port. Just below the display, we can see three buttons which are touch sensitive, one is the back button, a menu button and a menu button. Just above the display we can see the Sony logo placed stylishly. On the rear, ther is shooter placed on top near edge, along with single LED flash. The device comes with colours, Black, Pink, White with Silver, White with Gold. The smart design makes it weigh only 110 grams. 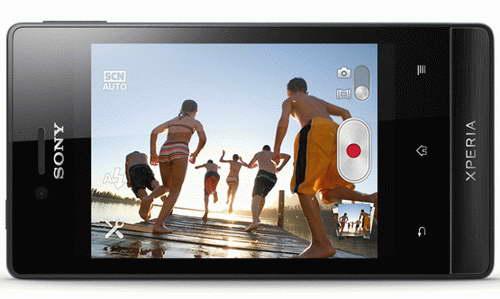 The Sony Xperia Miro supports dual cameras. One on the rear is of 5 megapixels and is enhanced with a single LED flash. The shooter supports auto-focus. The Xperia Miro has a secondary shooter too. It is of VGA quality. The shooter captures video in VGA quality @30fps. It is enabled with continuous auto-focus. The video capturing is enhanced by video light and video stabilizer. The camera is also featured with Geo-tagging, touch-focus, face and smile detection and 3D panorama. The camera can capture an image of resolution 2592x1944 pixels.

Connectivity and other Features in Xperia Miro

Although it is an entry level smart phone of Sony, they haven't shown any kind of shortage in case of the connectivity. Like any other smartphones , it supports both 2G and 3G. The 3G speed of the phone is standard HSDPA is 7.2Mbps and HSUPA is 5.76Mbps. The internet connectivity of this device is good for all the purposes which is possible in all other smartphones. It also has Bluetooth connectivity v2.1 A2DP, which enables the device in wireless remote data transfer. It also supports Wi-Fi of 802.11 b/n/g with Wi-Fi Direct and DLNA. It also has Wi-Fi hotspot feature.

Along with all these features thw Sony Xperia Miro has some other extra features, that makes it some what unique. The main thing is that it comes with Sony's Special Music Unlimiter option, in which the user can download or listen millions of songs in online and offline without showing any ads. But to get the full access, the user must have subcription to it. And the main fact is that this feature is not availabale in the market and only available for Sony users. Another thing that must be mentioned is the audio quality. It comes with the new Sony's xLoud Audio technology that makes it special in case of the sound excellency. The company says" the xLoud Audio technology gives you crisp and loud sound". In addition to the music category, FM Radio and FM Recording are also included in the machine. The next thing that need to be discussed is about the battery. The battery is 1500mAh that can deliver up-to 5hrs talktime in 2G and about 6 hrs in 3G. Company claims that user can enjoy audio playback for 36 hours. It also comes with a bunch of sensors including Accelerometer and proximity sensor. It also supports e-Compass. It has GPS with the A-GPS support. The browser suppoerts HTML5 and Flash. Has java via Java MIDP emulator, which is found in almost all the smart phones. It also has highly integrated social network integration, especially Facebook.

In the case of pricing, we can expect a little less than the high end smart phones that the device is only entry level. And the shortage in the pros and cons will also reduce the price upto an extend. Other thing is the poor battery and the lack of Gorilla Glass and video only records at VGA quality. The Sony Xperia Miro is expected to hit the Indian markets with a price around Rs.10,000. That will be about $200. The price really fits for every pocket. The Xperia Miro is expected to be released in this 2012 itself.

The Sony Xperia Miro is a smart device haveing so much cool features like, single core processor with good GPU, good storage options, brilliant display, smart designing, average battery life, high speed intenet, dual shooters and overall the best affordable price that fits every pocket. Although they announced it as an etry level device, it performs much more than an entry level. And the Smart device with pocket friendly price is the best deal that an average man can make.