Pros and cons of Chasing Yello game
Pros: Features a great set of controls. Very well designed gameplay which makes you feel very much interesting and challenging. Social features are being integrated perfectly to keep its users completely joyful and challenging.

Cons: Nothing is new in this game, all the features have been seen before in other games like Temple Run, Jetpack Joyride etc. Voice works are not much perfect, as it feels like to be grating after a short time.

I still remember that day when I owned Goldy, my sweetest goldfish. He taught me the responsibility of caring and helped me understand the ideas of loss. We would play together and made our day pretty happier. He used to dive in and out of the river making me run along the shore chasing for him. This is all I am talking about the great game: Chasing Yello. You might have understood about the game in brief. Stick along with me and I will tell you what are the features that might make you interest to have this game to make your moment joyful. I also will give you the pros that you will love and the cons that you will get to know about this game.

Chasing Yello is a wonderful game developed by Dreamfab and a follow up to the great successful game 'Saving Yello', I am pretty sure that you all could recall that particular game, right? Let us move on to the review: Chasing Yello is a story based game, which have a gorgeous gameplay. When the gameplay of Chasing Yello is being considered, it comes with a great piece of gameplay that is similar to Temple Run meets Jetpack Joyride. Chasing Yello game features a user friendly and simple interactive options, first one among those interactions is the simple and very impressive kind of swipe and tilt controlled gaming controls. 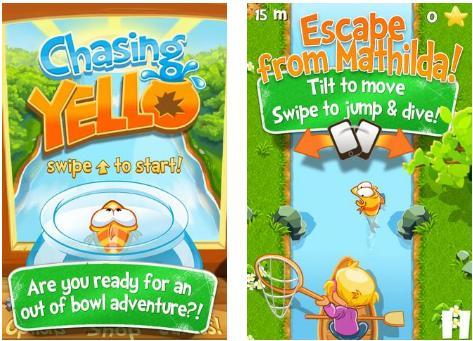 Chasing Yello features many missions for you to complete and allows you to gain level ups and earn more currencies as you complete those missions. You have to always keep your cute Yello one step ahead from the danger by using your power ups.

Chasing Yello is extremely great game with a solidly designed features which might blow your mind off. As you go deep into the core of this game, you also can see that Chasing Yello features a really well designed mechanics within the game, which will definitely makes you feel like you are going really fast and makes a real adventure background. During the game, you also should take care of your pretty Yello from the peppering rocks and burning logs and even from angry piranhas and other possible obstacles filled with dangers, you can avoid those dangers and save your Yello by just controlling him to swim under the water, dive over the obstacles and through much other controllings.

Overall this game 'Chasing Yello' provides a marvellous controlling option which are less gimmick and more user friendly along with a strong platform to give you high concentration on your game rather than focusing on the controls. Apart from featuring a great user friendly controls, Chasing Yello also features an interesting social features.

Every features which are being packed with this game, works very fine and I have really enjoyed them. While the similar games 'Jetpack Joyride' and 'Temple Run are being considered, Chasing Yello have brought a huge innovation which includes an endless fun and enjoyment for its users. Chasing Yello also hits the market due to the addition of meta missions and the unique set of controlling options. I am pretty sure that Chasing Yello is definitely going to hit the App store, you can just wait and see how fast it will get popular.

Chasing Yello is absolutely amazing game developed by brilliant developers, while the previous game developed by Dreamfab 'Saving Yello' we had seen that, it does not do things in an innovative way and also it is not much exciting as the physics puzzler. But Chasing Yello fills up that spaces and brought up new fans for the developer from all around the world. If you are really looking for a great game to play in your free time, then I would like to recommend you all this pretty interesting game, as this will definitely turn your boring time into wonderful moments. If you are a gamer who loves to play and explore more new games, then don't lose this game, you will be missing a whole new and unique adventure game.

Chasing Yello game is really fantastic than its previous one. You can play and experience it then you agree with me.