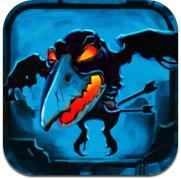 Pros and cons of Shoot the Zombirds
Pros: Extremely addictive gameplay with lots of challange
Cons: Upgrades are compulsory

Developers: Infinite Dreams
Shoot the Zombirds is an idiosyncratic shooting game formulated by Poland based Infinite Dreams. This company is behind a bunch of eminent games like let's create pottery and Jelly defense.

Gameplay of Shoot the Zombirds game

Have you ever wondered that you have brutally murdered some man, and one day he eventually wakes up to equal the scores against you? The thought of it also arouses a goose bump. In a similar way, the pumpkins or zombies are here to destroy the world.
The game seems to be mysterious and full of twists and turns.
A fiery game that reminds you of all the wrong deeds
It is a sequel of the Shooting Bird where you welded arrows and shot those naughty birds.
Imagine you have shot down every bird in the Shooting Bird, and now that birds have returned with a bang. Their thirst for revenge will devour the earth. If you are able to connect yourself with this example, you will come to know what actually the game is all about.

Features of the game Shoot the Zombirds

The daily morning rush of getting yourself ready can get you hassled. Shoot the Zombirds game bursts with goodness and adds versatile addition to the players. It is filled with essential entertainment, which ensures players start the game with skip in their step and smile on their face. Here are some unique features of Shoot the Zombirds that will capture your attention, on the first go.


Let's play the game
In the dark fantasy land, you are asked to protect the pumpkin boy and brethren from an unfortunate end. Undoubtedly, you have to face the angst of pumpkin boy but at the same time you have to save him from adverse circumstances. The armor in your arsenal is trusty crossbow; it will protect you from dangerous and perilous situations.

USP's of the game Shoot the Zombirds

The game is truly amazing and it lets you to overindulge emotionally and financially. The game is really worth the expenditure. Here are some unique selling propositions of the game

Shoot the Zombirds is a 3D game with a slew of mystical powerups at your doorstep. A word of caution-this game is not suitable for children, as it instigates violence among them. Shoot the Zombirds has been released on 24th May 2012 on iOS and Android platform.

Shoot the Zombirds is an average game and need to upgrade every time.

How to finish 21st level in the Zombirds game? Can anybody give guidance?