Lets welcome the first tablet by Microsoft called "Microsoft surface". This is not just a convertible tablet that adds up to the long list of the tablets available now. This was announced on 18th June 2012. First of all, this is manufactured by the famous, reputed and the mighty Microsoft.

It may sound crazy that how could they do that with no experience in the Tablet manufacturing field. But now, we can say, they have done it and we can assure that it will not be a flop. The Microsoft Surface comes in two versions. Although both the versions 'looks' similar, the difference is mainly in its internals. One of them comes with windows RT processor loaded in it and the other comes with the latest i5 intel core processor with per-loaded Windows 8, namely Microsoft Surface Windows RT and Microsoft Surface Windows Pro respectively. More differences we can discuss it later on this article. 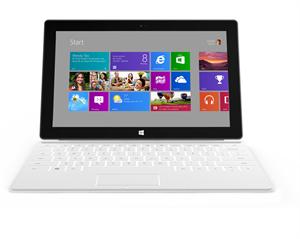 The Microsoft Surface has come with cool features and more over extra cool design. With all these features and smart looks, it is clear that it will be a tight competition with the i Pad and Ultra books. Also company assures that this will not be a tablet like Kindle and the users will get more features than they expected.

Memory and Processor of Microsoft Surface

The Microsoft Surface Tablet comes in two versions. Surface Windows RT version and Surface Windows 8 Pro version. The RT version comes with Nvidia Tegra based ARM chip. Its storage capacity is 32GB/64GB. At the same time the Windows 8 Pro version is powered by Intel's latest Third Generation i5 processor. It will be available in 64GB/128GB storage memory, according to the user. Till date we have no information about the RAM of the two versions. Its unknown that why the company haven't provided any thing about the RAM. 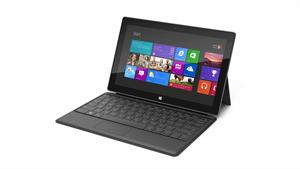 The Microsoft Surface and Surface Pro comes with a 10.6 " inch screen. It is of capacitive touch screen supporting multi-touch, as any other tablet that are released now would probably have. The company assures that it is of Clear Type Hd touch panel, which will be a new experience to the users. They have an aspect ratio of 16:9. The Clear type HD display panel provides an ultra-wide viewing angle and auto-adjusting screen intensity.

Both comes with good HD display that makes them a little ahead of other tablets. The company says that, the user won't be able to distinguish between individual pixels, when the tablet is held at 17" distance. The screen is of LED back-lit LCD type. It has a resolution of 1920 x 1080 for the Pro version and 1280x720 for the RT version. The whole Display panel is protected by Permanent Scratch and Wear resistant Glass. 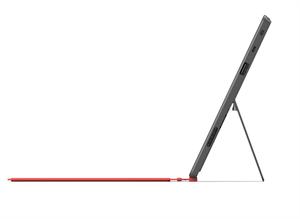 Microsoft has taken extra care to the tablet in case of the designing, that they have given importance to the looks than the specifications. This exta care can easily be seen by just a single glance on it. The front of the tablet is sleek black glass. The feature that has to be pointed out is that the presence of "VapourMg", pronounced as "VapourMag". Here Magnesium is melted and moulded to give the tablet a perfect and detailed finish. And this is the reason that the Surface weighs only 1.5 pounds. On looking, we can find that there is a Windows logo on the front, and the logo works also as a touch button that gives you the Start Screen.

The Microsoft had made the bezels on 4 edges touch-aware that it helps to swipe accross to bring apps and switching panes. The tablet is made light and the edges are made sloppy for maximum comfort. We can see a power button on top, 2 speakers on both sides. Both the versions of Surface has USB ports, a microSD slot, a micro HDMI port. Another thing that makes it convertible is that there is a magnetic strip to attach the accessories such 'Touch cover' and 'Type cover'. There is also a built-in kick stand in the back for the proper placing of the tab to get a better view. 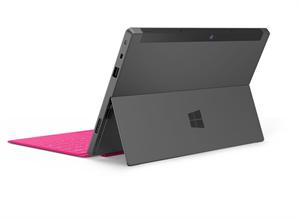 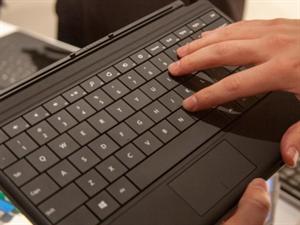 These are accessories that makes the tablet convertible. Unlike the other tablets out there, the keyboard here is attached by magnetic strip. It are of two types. They are Type cover and Touch cover. The Type cover is ultra thin. It works same as the keyboard. It is made possible by the audio feed back from it. At the same time, Type cover is a bit thicker than the Touch cover. Here same as a keyboard, physical keys are present.

Although the type cover is thin, we will be surprised on the depth that a key goes into. The smart designing of the Surface can be easily understood from the Type and Touch covers itself. Both Surface and Surface Pro has same connection snap to magnet latch and it fits firmly too. Another interesting fact is that it comes in five different flavours or colours. In the keyboard we can see 4 new keys specially included by the company. They are Search, Share, Devices and Settings. 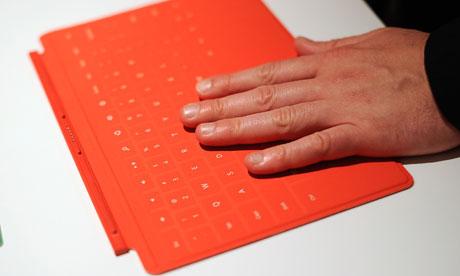 Both Microsoft Surface and Surface Pro looks Similar, the main difference is in the case of the internals, as we seen above. The Microsoft Surface comes with Windows RT, loaded with Nvidia Tegra based ARM chipset. It has a weight of 676 grams. It comes with Windows RT + Office Home and MIMO antennae. It will be launched along with the launch of windows 8. It is accessorised with Touch cover, Type cover, VapourMg case and stand.

On comparing we can see that both tablets differ in the processor loaded in it. And due to this, there is difference in dimensions too. It can also bee seen in the weight. Both are provided with almost same accessories, expect for Surface for Windows 8 Pro, because it has an extra active pen. The difference can also be seen in case of pricing too. But till now, we don't have any idea how much it will cost.

Connectivity And Other Features Of Surface Tablet

Unlike all other tablets, Microsoft Surface is facing a bit shoratge in case of connectivity. Sadly it is said that the tablet will hit the market with no mobile connectivity such as 3g/4g but only with a short range Wi-Fi. And let's hope this will be changed in coming versions. It also has dual camera support. The rear shooter features auto-focus.

It comes with pre-loaded Internet Explorer as the default browser. It supports HTML, HTML5 and Flash. It has Positioning system with A-GPS support. It enables Navigation too. Another thing which is to be specified is about the USB port. The RT version comes with USB 2.0 and the Pro version comes with 3.0.

Overall, by analysing the information that we have till now, we can say that these super features included in Microsoft Surface is enough for the users to buy this without considering another tablet. But it can be confirmed only by knowing the exact price of the product.

From all this we can conclude that the Microsoft Surface will be a tough competitor to the other mighty ones there, also it will be competitive in case of pricing too. And then only we can say that the hard-work of the Microsoft has hit the right target.