Pros and cons of game Subway Surfers
Pros-The game is fun and addictive. Good for all ages to delve into. By decluttering and focusing on one's core skills is the best way to win this game. The other thing that provides vividness to this game is cartoony style characters; they are lively enough and keep your pressure valves in check.

Cons- Swipe Reading is the major turnoff of the game. Most of the time, swipes aren't read and when you try to read them, it becomes all the more difficult. The title also doesn't suit the game well. The game also dips in framerate.

Subway Surfers game isn't stuck to fun and entertainment, its much more than that

Subway Surfers is a game developed by Killoo Games, that's not like any other knocking game. You can play all modes in 3D, as a single player. The game is available on both iPhone and iPad.

What Subway Surfers game is all about

Subway Surfers game is inspired by the activity known as train surfing, but there are some major differences. Contrary to its name Subway Surfers, there do not seem to be any trains that go underground rather; the game is all about the chase to evade cops at all costs. It means you will be doodling on trains, jumping hurdles, and taking advantage of power ups like hoverboard. The game is somewhat similar to Temple Run, where the hero is adept in running marathons and not the sprints. 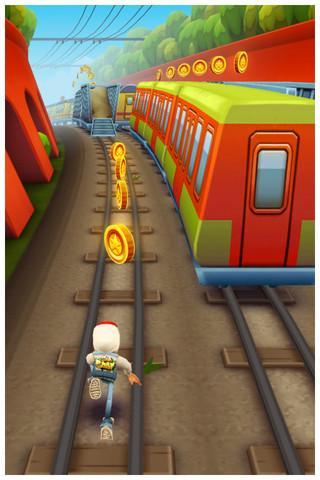 It is a free game, which allows you to use currency to buy the powerups, which in turn help you to go farther and gain higher score. Also, you can use the actual real life currency to purchase these coins.

The controls of Subway Surfers are somewhat different and unique in contrast with what you find in other runners game-You need to swipe left and right to switch lanes, up to jump and down to tuck and roll. If you have powerhouse items in your store, you can double tap to activate them. It's a control game that attracts every game player's attention.

The concept of Subway Surfers is very simple. You play the role of kid (other two are available on purchase) and you are caught by inspector and faithful pitball for tagging a train car in a train yard. The kid runs off at the first instance, the inspector and the dog is badly chasing your kid in order to nab him. So, you need to jump, roll, and do various other things to protect yourself from the cop and his dog. 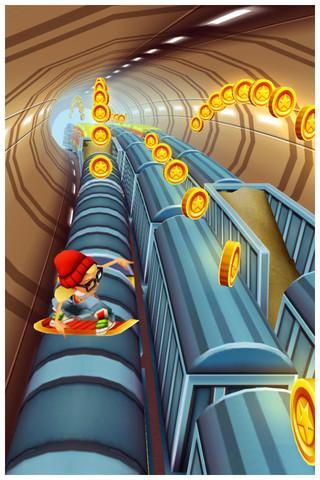 The game is not divided into stages, which means that there is little variety to explore your surroundings, but at least there are no repetitive actions. Unlike the similarly styled Aby Escape, the where the controls are tilt based. No doubt, the game controls work plainly most of the times, but at some instances swipes don't register quick, and one false move can lead to dire consequences.

The points that work in favor of this game are graphics and stunning visuals. The music track is not memorable, not bad either.

In epilogue, Subway Surfers has its own share of faults and foible, but it offers players a fun experience. The cartoony style characters unveil the secrets of trade- what it takes to develop yourself into a successful player.

This is a great review post on iOS game Subway Surfers. Good job.