HTC released the HTC One series of Android phones in June 2012. HTC is best company which is in collaboration with Microsoft and making Windows mobile phones. In starting HTC released Windows phone, but cost of this phone is very high compared to other manufacturer in Indian market. Now, it has released low budget phone with latest Operating system like Android based mobile phones. Most of the people who like Windows based phone are business man and students because the phone supports all type of documents viewer and PDF reader along with editing options.


Basic difference between
HTC One S and HTC One V?

From the image below you will get the basic idea about its physical appearance. Both phones look identical in terms of physical appearance. In fact, they are essentially the same phone with very minor differences. The HTC One V is the successor of HTC One Sand and shares most of the features with its predecessor.

HTC One S vs HTC One V

From the image it is easy to find out the rough physical dimensions of both the phones and weight of the phones. The HTC one S has bigger in screen compared to HTC one V but thickness is less so, it easily fits in to your pocket. The display of the HTC one S is 4.3-inch AMOLED and HTC one V has 3.7-inch super LCD 2 and also difference in resolution of both the models.

CPU: HTC One S has a better and faster processor

If we talk about processor of both the phones HTC one S has very advance processor 1.5GHz~1.7GHz, with dual core technology. HTC One S comes with 1GB as internal RAM and 16GB of Internal storage memory. HTC one V has 521MB as RAM and 4GB internal memory for photos, videos, and document saving, but this model contains extra slot for memory which supports 32GB external memory.

Comparing battery of HTC One S and HTC One v

Both the phones don't have exact battery, battery in HTC one S is more powerful compared to HTC one V and also allow you to talk more and stay online. The HTC one S comes with 1650 mAh and HTC one V has 1500 mA. This is the third and most important difference this two model because when anybody wont to purchase mobile phones he must capered battery backup. In this comparison HTC one S is very good, which gives you good battery backup and allow you to surf more.

Camera: No front camera added to HTC One v

The HTC One S is released with 8 megapixel (3264×2448) with autofocus, and smart LED flash is mounted at the back side of the mobile phones which allows you to take clear pictures in night as well one more sensor like BSIsensor in available with this model. Using this phone's 1080p HD video recording and play back is possible. The second model HTC one V is powered with 5 MP rear camera with autofocus features and also comes with LED flash light which used for taking clear and batter pictures at night or in dark. The HTC one S comes with VGA camera as front camera for video calling this facility is not available in the HTC one V model because HTC one V is not loaded with front camera. Front camera is also good if want to use your mobile phones as webcam while you chat with someone using PC or Laptop. 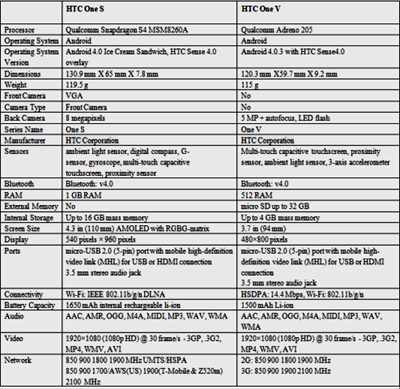 From the above table we can say that some features are in common between two model but some basic differences are HTC one S is loaded with Android 4.0 ICS as a operating system and HTC one V have 4.0.3 ICS, main difference is Camera resolution because HTC one S has 8 MP with front camera but HTC one V is powered with 5 MP without front camera. Some other difference like RAM, Display and battery etc.


Conclusion of this comparison

It is worth to buy HTC one S because this model is comes with all latest features with dual core 1.5 GHz processor and 1 GB RAM. The camera of this phone is 8 MP with LED and all types of sensor.

How to Update HTC One S with Cyanogen Mod 10 Based Jelly Bean 4.1

HTC One S users can now enjoy the actual taste of JellyBean 4.1 by updating their device with Cyanogen Mod 10 Based Jelly Bean 4.1. This is an unofficial release of Jelly Bean 4.1 update, so you can expect only some features of this update to be working perfectly. Read on this article to find out 'How to update your HTC One S with latest Jellybean 4. Custom ROM'.