Pros and cons of Magic: The Gathering - Duels of the Planeswalkers 2013
Pros- The music is intimidating and hypnotic. It is a multiplayer game that looks perfect on iPad.
Cons- It's just the old wine in new bottle. Nothing new from Magic 2012.

Magic- The Gathering is so big game that it is called granddaddy of all the trading games. It was released way back in 1990; it has expanded its way to becomes booster packed game. Nonetheless, it magic tricks and formulas have left a host of imitators in dust. The card color, tweaks, and tricks have changed, but what remains constant is magic spell.

Gameplay of Magic- The Gathering - Duels of the Planeswalkers 2013 game

The game is all about union of magic, tricks, and tweaks. Here each player is portrayed as a planeswalker, attempts to build mana pool before expending that energy in casting magic spells and summon creatures. Players have 20 lives, and your mission is to deteriorate opponent's health to zero. 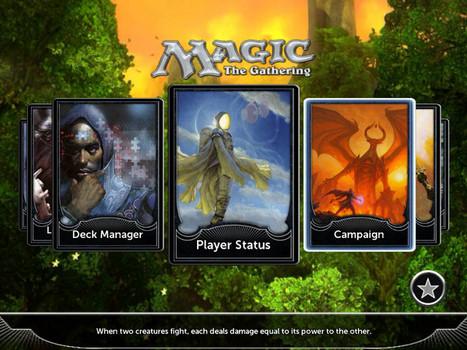 Magic- The Gathering - Duels of the Planeswalkers 2013 is a game with a great depth, but thanks to the way it has been constantly refreshed. There are enormous cards and game modifiers like PlaneChase. The cards are divided into 10 deck colors:
Ancient Wilds (Green)
Born of Flame (Red)
Celestial Light (White)
Crosswinds (Blue)
Dream Puppets (Blue)
Exalted Darkness (White and Black)
Goblin Gangland (Red)
Obedient Dead (Black)
Pack Instinct (Green)
Peacekeepers (White)

You can opt for a dragon summoner or launch a great beast that becomes stronger in the process. Also, the game proffers a tutorial and variety of hints and reminders that you can turn on and off at any point of time.

The cards are unlocked with a run through campaign and your opponents give you hints and suggestions that need to be picked and improved upon. As the deck is used, there are more of cards to unlock, and you start to explore the unexplored possibilities, the combinations that can create an army or strategies on how to turn your opponent offense into a strand of dust.

The enjoyable part of the Magic- The Gathering - Duels of the Planeswalkers 2013 game is multi part campaign captures; it is seeing how different deck cards works. Other part that attracts the player is there is a short interplay in every game. The key to success in this game is to understand your opponent strategy and based on that change or formulate your tactics every time.

The first round seems to be everyone's cup of tea. It teaches you the basic strategies on how to unlock the deck, but the revenge campaign is a herculean task to perform. What bridges the gap between the two campaigns is series of encounters, where you learn to play the game in exact style.

It is a multi opponent game that contains duels and challenge and scenarios that has chunks of pleasure and entertainment. Beyond the first level, it's hard to determine the difficulty level because it also involves the element of risk.

By playing Magic- The Gathering - Duels of the Planeswalkers 2013, you'll agree that nothing is as good as this game. Awesome! is the first word that strikes my mind after playing this game.
Element of surprise acts as a magnetic chest plate to the shrapnel. Technology has really changed the life. Also, this online game delivers you stats, world ranking and player profile. The only thing that dampened my spirit was image, noticed in Gizmodo's spiteful stunt.

Posts like this make the internet such a treasure trove.