Pros and cons of Fish Heroes
Pros: This games comes with over 100 of levels. Unique fish weaponry with cute and favorable visual effects.

Cons: Poor apply of physics frequently throughout the game. Lacks feeling of a visual effects during speed or impact.

Something has to be done when evil sharks all around the world are capturing helpless fish and making them as a food product. Fish Heroes is a game designed for you to threaten and fight against the bullies inside the deep sea. You are meant to create justice and bring back the freedom for the helpless fishes. Fish Heroes is a physics based puzzle game which resembles the recently launched wonderful game: 'Catapult King'. Let's see what all features and gameplay does make me write an article about Fish Heroes. Let us go deep into the specifications of this game.

In Fish Heroes you are meant to send the evil shark to Davy Jones locker by pulling the fish backward and applying your basic physics logic. It may seem too hard at first but practice makes you an excellent player. The only thing you need to have a great concentration and simple physics logic to apply. Fish Heroes is a fantastic 3D game to enjoy your time with.

You can earn up to three stars as reward for your good performance and you are allowed to purchase power-up anytime as you wish, which can be used wisely for for skipping those puzzles that are too difficult for you to solve. Although there are many physics related puzzle games similar to Fish Heroes, still Fish Heroes does much different features from them. 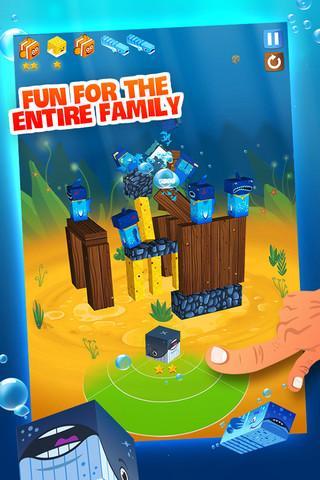 The weaponry used to fight against your enemies in Fish Heroes is just similar to that usual ones of Angry Birds. Even though Fish Heroes apply a similar theme as that of Angry Birds and all, Fish Heroes features a plenty of other unique ideas such as spinning barracuda, the octopus which can dissolve the first hit that it receives, etc makes this a wonderful game to enjoy.

Fish Heroes comes with a tremendous number of levels, having about 105 in total. Even the gameplay of Fish Heroes also feels variety and provides an admirable 3D visual models. The game also is pretty good in the field of implementation of the controls.The controls are designed extremely easy and attractive, For example, the position where the fish is about to fly will be revealed by a smooth control option which will make a target reticule.

This control option will also let you to fire your fish from any starting point by aiming at 360 degrees. The only one failure for the control option here in this game is that once you have pulled out the slingshot and the only option which is left with you is to fire your friends to destroy your enemies, apart from no coming back. 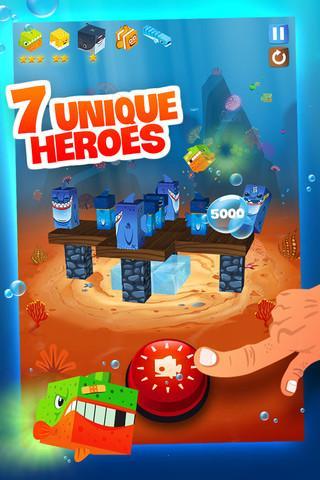 The good example for the 3D visual effects featured by this game is that, at the end of the collision it clearly makes us feel to be like the act going on under the water. Although the game features a nice Visual 3D effects, that lacks many animation which were included in other similar games. The game also provides very poorly slow and boring impacts during the gameplay. Also, during the gameplay don't expect the structures to break really fast, as they rarely breaks.

As the main genre of this game is all about destroying structures and your enemies, this particular feature of this game will let you down during hard stages. Also, you must remember one thing that the logic of applying physics on this pretty puzzle game won't help you get any favors. It is also felt by me that the exactly same action led to different performance in each different stages.

Even there are many occasions where I was amazed by the crazy gameplays, there were many situations where my normal goldfish was just enough to smash down the giant sharks, this particular action by my normal fish was really unbelievable and I was pretty shocked by this act. While on some other times it was just like throwing off a ping-pong ball.

As you all think and like other games, Fish Heroes features a wonderful upgrade for the fishes which have become your pretty unbreakable friends. You can play long and act wisely to unlock even more powerful fishes. Although the game feels pretty underwhelming, it won`t lose your hope as it never stood ever as a level of being a bad game.

Finally it is time to end up our story here. At last we found that Fish Heroes is an amazing game which is based on physics related puzzles.

If you are really interested in this game then don't stay back without having one, get one now and I bet you that this game is a worthwhile with enough charm and an interesting background.