Lenovo delivers a cheap price but good Tablet known as Ideapad A1 22282 EU. This device runs an Android 2.3(GingerBread) as its user interfacing Operating System. Lenovo Ideapad is extremely thin and lightweight device with only 0.5 inches of thickness and weighing about 14.1 ounces. It also features a fantastic 7 inch multi-touch capacitive touch screen. The display of this device Lenovo Ideapad is extremely fantastic as the screen also packs with LED Backlit.

The Lenovo Ideapad holds a OMAP 3622 processor of 1GHz which is powered by Texas Instruments. The device also features a LPDDR2 RAM of capacity 512MB and internal storage of 16GB. The 1GHz processor along with the DDR2 512 MB RAM gives Lenovo Ideapad to perform in a lightning speed without any lag. 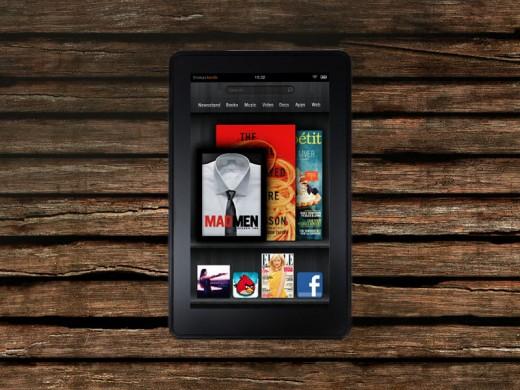 As far as Kindle Fire Tabet is concerned, it is a very famous tablet introduced by Amazon. This had become the real piece of tablet that had launched in the market which of low cost. The fantastic specifications inside the tablet marketing at a low price has made this a fascinating product.

Kindle Fire comes with a gorgeous 7 inch display powered with IPS(In-Plane Switching) technology. This tablet holds an anti reflective coated touch screen display that allows its user to have the highest resolution of 1024X600 pixels, which is large enough for a Tablet to display text and images to look very sharp and clear. This tablet is also extremely thin having a thickness of 0.45 inches and a light weighing device having 14.6 ounces.

Kindle Fire features a 1GHz dual core TI OMAP processor with a 512 MB RAM. It also have an internal storage capacity of 8GB which is large enough to make the device perform smoothly without any lag.

Although the features of Kindle Fire still here were too good for its low price, this device has got no camera even though it runs Android as its user interface. The vacancy of camera is a large drawback for a popular device like Kindle Fire. Apart from absence of camera this device also lacks rest of other connectivity options like Bluetooth, 3G etc except WiFi. Also this device is not good for performing many Android apps as we expected. But for the lowest rate of $199 buying Kindle Fire worth its price. Also we see very rare products offers IPS technology that too in a tablet, but it is so amazing that IPS is designed for Kindle Fire which can be available in the market for cheap rate.

Nook color is equipped with a Ti OMAP 3621 Processor clocking at a rate of 800 MHz, which is slightly unimpressive one. Nook Color Tablet also holds a 512 MB RAM and 8GB of internal storage.

As far as the company is concerned, Dell is a familiar computer manufacturer which keeps its name and fame by manufacturing technologically built computer products. Early dell delivers a Dell Streak Mobile, a hybrid of both mobile and a half tablet, in the market. Now dell has also released its new product Dell Streak 7 Tablet having full 7 inch multi touch capacitive touch screen display. This devices comes with no mobile feature, moreover it features a great display having 800X400 pixels of high resolution power. This is a lightweight device weighing about 17.6 ounces.

The tablet also holds a fantastic dual cam feature. It comes out with 1.3 megapixels of front camera that really supports video chatting /conferencing, while on the rear side of the device it holds a great 5MP camera which allows the users to have snapshots.

While digging out more we can also find out that Dell Streak 7 delivers out with a nice configuration on its hardware. The hardware of this pretty device is powered by 1GHz NVIDIA Tegra T20 based Dual Core Processor which gives the device to perform in a lightening speed. Dell Streak 7 too holds a 16GB capacity of internal storage.

After all by featuring a fantastic configuration Dell company is not ready to give away this product for cheap rate, but compared to the configurational tuning the device is pretty awesome in its admirable price of $199.95. 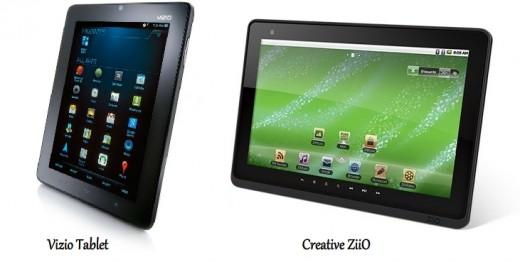 As far as Creative is concerned, we are much familiar about it as a company that manufactures quality speakers. Although creative is an accessory manufacturer, now the company jumps into tablet section. The newly released, infact this product is considered as the first ever product by Creative other than some other accessories. This device features a very good performance having many interesting features that will make it worthwhile its price.

The built in camera of Creative ZiiO tablet features an impressive performance with a high quality speakers. Creative ZiiO also delivers a 8GB internal memory and the device packs with processor which is powered by 1GHz and a 512 MB of RAM. All these features altogether makes the device large enough to perform at a very high speed.

The most attractive feature of this device is that, it comes with a great 10 inch touch capacitive screen having high resolution of 1024X600. With all these features and fantastic configuration, the device pops out in the market for $199 which makes it cheaper but very special in performance.