Google Nexus tablet and its specifications

As per the recent announcement from Google, they are going to release new Google Nexus tablet within six month and the tablet is set as rival to Apple company's iPad. The tablet will be full of high quality features as per the announcement. Google may consult Samsung, HTC or Motorola for hardware manufacturing of Nexus Tablet. Google is taking time for trying to cope up with and compete with Amazon Kindle Fire tablet. 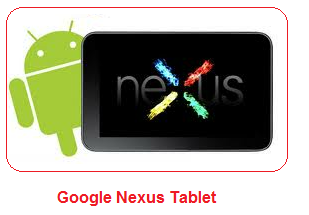 iPad Mini tablet and its specifications

Apple has announced new tablet called iPad Mini and its unique feature is its size. A mini word means it will be smaller than tablets in the current tablet market. This iPad Mini will be of around 7.85 inch screen size and would have 1024 x 768 as screen resolution as that of earlier tablets but resolutions may be increased to double to that of 1024 x 768 i.e. 2048 x 1536. Price of iPad Mini will be around equal or less than Kindle fire price as Kindle fire is booming in tablet market of non-ipad tablets. There is no clear indication of expected release date of iPad Mini tablet from Apple. Let us see and wait. 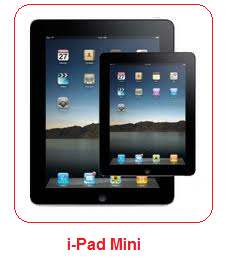 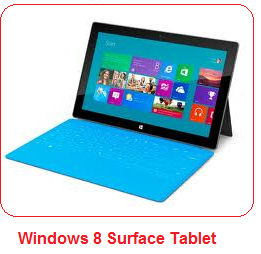 Surface model with Windows RT will contain HD display, 32 GB or 64 GB as in built storage, MicroSD and USB 2.0 as connectors options. Wifi connection. Processor will be of Tegra 3 technology. This tablet will be having weight as 0.676 kg and has battery with 31.5 Wh capacity. While Windows 8 Pro model will be having weight of 930 gm, 13.5 mm in thickness, Processor of i5 Intel Ivy Bridge technology, 1920 x 1080 screen resolution, 42 Wh batter capacity, 64 GB and 128 GB as internal memory, twin cameras, dual microphone as well asd sterio speakers. Connector types are MicroSDXC and USB 3.0. Both the tablets will be available with touch cover and type cover.

Amazon Kindle Fire 2.0 and its specifications

As per annoucement from Amazon, latest model of tablets from Amazon from Kindle fire series will be Amazon Kindle fire 2.0. Amazon will release two different models with 7 inch and 10 inch as size difference. 7 inch tablet will compete with iPad Mini tablet in future.

One model will be having 1024 x 600 as screen resolution and other will be having 1280 x 800 resolutions. 8.9 inch version with HD display is also in pipeline for release and will compete with Apple's new iPad aside. The expected date of release for Amazon Kindle fire 2.0 version is later part of this year i.e. 2012. 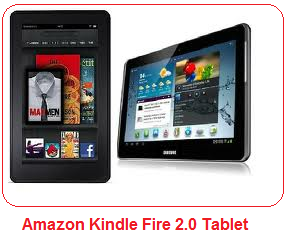