It has been a while since Samsung, one of the world's largest technology companies introduces their latest smart phone viz. Samsung Galaxy S3. This is the third addition to the Galaxy S series by Samsung and is the most advanced phone of all Samsung devices. Here is a review of what the phone has. 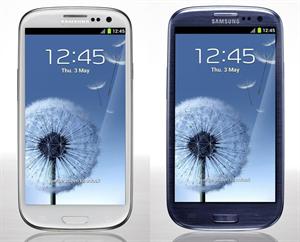 Samsung Galaxy S3 has a ultra slim look with 4.8" super AMOLED capacitive multi touch display. It has two fabulous cameras. The rear camera is an 8 mega pixel one with auto-focus and LED flash and the front camera is 1.9 mega pixel. S3 is available in two colors marble white and pebble blue. Both these colors give a feel of nature, justifying the tag line,Inspired by nature, designed for humans

Samsung Galaxy S3 has several features which are not just attractive but unique too and this makes it one of the most advanced phoned ever released. The most attractive I found was the S-voice natural language commands and dictations. Commands can now be spoken as a voice input to the phone. One more unique feature is the Smart Stay eye tracking system which tracks where you when you are looking to the phone through the front camera. The brightness and contrast are adjusted according to your eye and the back light never turns off when you are looking to the phone. Now this feature is very handy as you don't have to push buttons again and again when you loose the back light while text messaging or Internet browsing.

Camera of Galaxy S3
Samsung Galaxy S3 has a 8 mega pixel primary camera with LED flash and auto focus features. The rear camera adjusts itself according to the scene it is shooting. This camera can be used for both image capturing and video recording simultaneously which is again a unique feature of Samsung Galaxy S3.

The front camera has 1.9 mega pixel resolution which has the Smart Stay eye detection feature as discussed above.

Display of Galaxy S3
The display of this smart phone is full HD display on a super AMOLED touch screen with 16M colors. The size of the screen is 4.8". The screen supports multi-touch and has Corning Gorilla Glass 2 protection.

More features of Samsung Galaxy S3
• The phone runs on Android 4.0 Ice-cream sandwich which is the latest version of the most popular open source operating system Android by Google.

So this was a brief review of Samsung's brand new smart phone Samsung Galaxy S3. Looking forward for your comments and also please do it share among your friends.