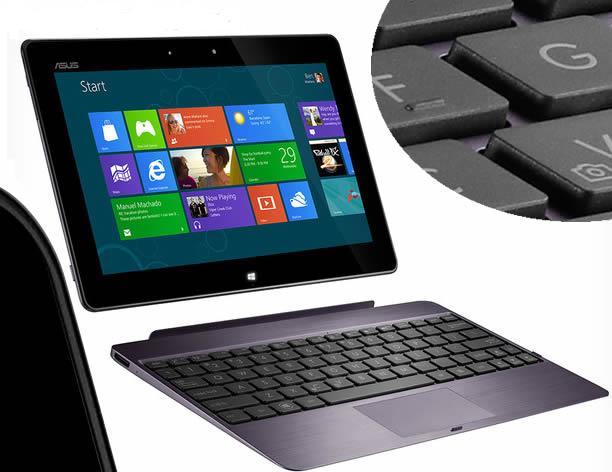 ASUS is a leading by offering its variety of technologies to the world. ASUS is one among the world best company that step ahead in the field of technology. ASUS Transformer Pad line of tablets are the most popular Tablet on today`s market. ASUS develops its technology in building an optional keyboard to turn a Tablet into an ultrabooks. ASUS recently announced its new product to hit the market which is a transformer like tablet: ASUS Tablet 600, which is a transformer like plate and predecessor of ASUS Tablet 810. Although, it looks similar to ASUS Tablet 810, ASUS Tablet 600 runs with Windows RT as its user interfacing Operating System. This device is also convertible like ASUS Tablet 810 and ASUS Transformer. Apart from the changes in ASUS Tablet 600`s resolution power and the loaded Operating System, it has exactly the same features that may even confuse the tablet with the ASUS Eee Pad Transformer Prime. It has got a larger display and power-ups which will give this device an extra performance compared to other ASUS Tablets. ASUS Tablet 600 comes under the Ultrabook Session along with its preloaded ARM powered processor with Windows RT installed. But the ASUS Tablet 810 comes with an Intel Based processor with full Windows 8 running on it.

ASUS Tablet 600 runs Windows RT as it is a new version of Windows OS designed to run on low powered ARM based processors. As it was mentioned earlier, ASUS Tablet 600 comes with an optional keyboard that lets you convert your Tablet into a laptop or vice versa. The tablet as well as the dock holds many additional ports which helps in easy access of connectivity. ASUS Tablet 600 is also a thinner tablet which is similar in size to that of ASUS Tablet 810. But this device lacks the latest 3rd generation Intel iCore processor. The device is also fully loaded with Windows RT. ASUS Tablet 600 can also be converted into normal tablet by detaching the screen from the keyboard.

ASUS Tablet 600 has got an interesting Display features which a random user could ever imagine and the screen is capacitive multi touch display. ASUS Tablet 600 comes with a fantastic display of 10.1 inch with IPS(In Plane Switching) technology. The latest IPS technology enables the user to get more accurate and clear colours from almost all viewing angles similar to what you will find on other Transformer tablets. The device also delivers a resolution power of 1366X768 pixels for its fantastic display which is explicitly HD. ASUS Tablet 600 also features a stunning Backlit LCD display, which is enriched in the sharpness and clarity of the images that the screen illuminates.

On the back side of ASUS Tablet 600 it has an auto focusing camera of 8 megapixels with an additional LED flash which is rarely seen on these kind of ultrabooks. The interesting feature is that ASUS Tablet 600 also holds another front facing camera of 2 megapixels. The availability of dual camera with high quality shooter makes this device extremely worthwhile.

ASUS Tablet 600 packs with a quad-core NVIDIA Tegra 3 chip which was the same for Android powered Transformer Device. This ARM based chipset specification of ASUS Tablet 600, it will be unable to run most of the apps which are mainly designed for Windows Computers with X86 chips. Unlike ASUS Tablet 810 which has a high performance Intel Ivy Bridge processor, ASUS Tablet 600 lacks that great performance as it has got no 3rd Generation Intel Processor. This device also features 2GB RAM and a 32GB of solid state disk running smoothly inside it.

Like other similar Tablets and Ultrabooks, ASUS Tablet 600 also features the common connectivity facilities. ASUS Tablet 600 has got a WiFi, Bluetooth 4.0 and rest of the features will be soon revealed by ASUS. It is expected that ASUS Tablet 600 will be a lightning fast during the data transfer between the wireless networks.

Other Specifications of ASUS Tablet 600

ASUS Tablet 600 features usual array of sensors including gyroscope, e-compass, GPS, NFC etc which had made this device an excellent option for all in one device. ASUS Tablet 600 also has got a single micro HDMI port, 2 USB 3.0 ports and 3.5 mm headset jack all around the device. It has also got a microSD card slot which is delivered to hold microSD card upto 32GB.

The things that the company not yet revealed is the battery life and the price. With ARM based processor inside we can expect a long battery life like the ASUS Transformer Prime and Transformer Book, which are the most successful previous designs of ASUS. Even if it comes with 2 batteries, one on the screen and other on the main body, the battery may exceed more than 8-10 hrs which is large enough for a notebook to standby.

Price and Availability of ASUS Tablet 600

The next thing is the price tag of ASUS Tablet 600. With all these big features and huge specifications, ASUS will not let the price be small. And will be in the range of about $1000 or more. Although it is more expensive with its cheap processor inside, it promises many extra cool features that which we can't refuse.

What is the price of Asus 600 tablet in India. Can we use 64GB Micro SD card in this device as in below article it is mentioned that only 32GB space is supported for this device?