Today Microsoft surprised everyone by entering into tablet PC market and announcing a new Tablet PC called Surface, designed for Windows 8. Microsoft said that the upcoming Surface tablet is going to be out in two versions as Windows 8 Pro Version and Windows RT Version. 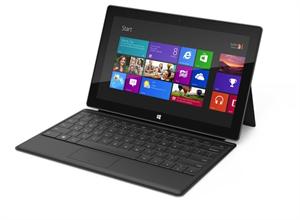 Microsoft announced that the Surface Tablet is the "first PC that is going to come with a vapor-deposited (PVD) magnesium shell." Microsoft announced that the Surface tablet is designed in a such a way that it get the feeling of a book which stands straight which is connected to a kickstand that rests on hinges at the back of the tablet. It's almost similar to the smart cover that protects the iPad, with a physical multi-touch keyboard on its back. The cover is directly connected to the Surface Tablet and can be easily folded over in order to protect the screen.

Windows 8 Pro version comes out as a thicker & heavier weighing around 903 grams with 13.5 mm thickness and is designed in such a way that it competes the current ultra-thin notebook computers with a configuration of 64 or 128 GB.

Windows 8 Pro version comes with an Intel Core i5 chip that runs all the standard Windows desktop software like Word, PowerPoint, Excel and other Microsoft office products, Photoshop as well as the Metro apps.

Windows RT Version runs on an ARM CPU and it doesn't support standard Microsoft Office desktop apps that are supported by Windows 8 Pro, but it runs on a limited functionality basis which is known as Office Home & Student as well as Windows Explorer.

At this point of time Microsoft didn't reveal any details regarding the price or release date of Surface Tablet but Windows RT version is expected to launch at the time release of the actual Windows 8 OS and the cost might be based on comparing with the ARM based tablets available in the market at that point of time. On the other hand Windows 8 Pro version is going to be released 3 months later from the release of Windows RT version and price may be based on other ultrabook tablets at that point of time.