Before downloading, it should be clear that beta iOS6 is completely intended for developers who work on creating or updating apps. After installation, iOS 6 spends horrible battery life and some features won't work at all and may be that you have to repeat your work many times. But being a developer, I know that there is no time bound for developers and we are use to spending hours on coding and testing. Secondly, there is no easy way to revert back your device to dunning iOS 5 again, once you have installed iOS 6 on it. Beta testing is not as cool as it seems to be. It can lead you to be frustrated also. So, first be prepared for all above and then start loading iOS 6.

For an individual account, the iOS developer programe costs $99 and as a company account you will have to bear $299.

Make UDID of the iOS device

Register the UDID of the iOS device you wish to test on with the iOS developer program. This is quite necessary to make the device eligible for installing beta iOS software from Apple.

Take backup of before installing

It is recommended that one should take complete backup of his system to be ready to face any mis-happening while installation.

So let's get started with loading beta iOS 6 developer preview

1. First, its need to run iTunes 10.6.3 and the iOS 6 beta file or files for your respective device. You can get them from Apple's developer center as they are already available there for registered developers.

2. Using iTunes, connect and back up your device now. Though restoring from an iCloud backup also possible with iOS 6, but it is not recommend. Since this is a beta; things may go wrong. So, be sure that you encrypt the local backup, as doing so saves you from having to enter account passwords and the like after a restore.

Hold down Option on your Mac keyboard and click on Restore.

3. Once backup completes, hold down Option on your keyboard and click on Restore. 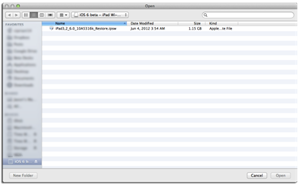 4. Select matching IPSW file for the device you are loading iOS 6 on:

5. Then iTunes will start extracting software to install it on your iOS device. Your device will reboot a few times and the screen also flash some different graphics during installation. Though it takes about 10 minutes for complete installation or it may take some longer also.

6. After finishing installation, you should restore your device from the backup you created in step 1. Now you are ready with your iOS 6, complete with your apps and information, up and running on your iOS device.

7. On facing any issue, you can take help from the Apple Developer Forums.