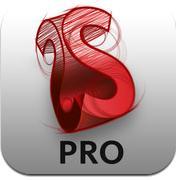 If you're looking to create drawn artwork from the ground up in your iOS device, then Sketchbook Pro is probably your best investment. This application from the Autodesk Corporation is loaded with a variety of tools and settings that will help you create practically anything. The app costs only $4.99 and that will get you over 60 different brush and pen types. For an additional in-app fee, you can install up to 90 more shapes and sizes. All of these brushes and pens are fully customizable.

If you find yourself making a mistake while painting, you can easily undo it. In fact, Sketchbook Pro offers 30 levels of undoing and redoing. A level as counted every time you touch the screen and then touch off of it, so 30 level support will allow you to work freely without the stress of mistakes.

If you open a 1024 by 768 pixel canvas size on the iPad HD you'll get access to 18 separate layers to create on. All of these layers will stack atop one another and count towards the same file. If you set your canvas size to a 2048 by 1536 resolution, you'll get access to around 6 total layers. These layers are also customizable and can be altered in a variety of ways. You can turn on different blending modes and even change the transparency of a particular layer. Layers can also be merged together. You can even rotate, scale, and move layers at any time while working.

If you want to zoom in and out of the painting on iPad, all you have to do is pinch with two fingers. Three small finger taps will give you access to all of the programs controls, and a three finger swipe motion will give you access to quick menus. This makes the program really easy to navigate and understand. You can also customize your own interface, you can add shortcuts to specific tools you use often and can even place where these shortcuts are and how you access them.

Once you are done with a specific project, you can save it to a specialized gallery. You can also store work you are currently working on and open it at a later time. Files can be imported and exported as PSD files and can also be shared via Tunes File Sharing or Dropbox. The program even allows for iCloud support if you wish to save your artwork off your device.

For a price point of only $4.99, imagine how much money you'll save if you move your art to the digital world through Sketchbook Pro on iTunes. With the iPad ND's retina display and its impressive resolution, you'll be able to create beautiful works of art. Remember, just because something is done digitally doesn't mean that it cannot be printed onto artist quality paper or shown in a gallery. 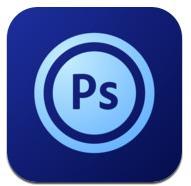 New technologies have created a completely new form of artistry called photo-manipulation. If you aren't necessarily into drawing or painting, maybe you'll find your muse in tweaking and touching up pictures. Adobe Photoshop Touch is what many consider to be the premier photo-editing software available for any iOS device.

Adobe Photoshop Touch will only cost you about $9.99, which is a snail fraction of what some of the more powerful photo-editing programs cost Although, it's important to understand that you aren't getting a lot of the same tools that the PC version of Photoshop gets, as the Pad doesn't have the capacity yet to run some of Adobe's more hardware— intensive features. But that doesn't mean that Photoshop Touch is some fly-by-night application. This program was scaled down for the iPad HD but it still offers a plethora of photo-editing tools.

Like Sketchbook Pro, Photoshop Touch makes use of layers. These layers can be stacked atop a photograph and allow you to manipulate the picture underneath, without actually changing anything about it. Layers work great because you always have a clear- cut vision of what the photograph looked like before you started editing. You can change the "filter" on these layers and you will have access to Normal, Screen, Overlay, and Multiply.

While this may not seem like a lot to the modern photo-artist, it is more than enough for general editing and manipulation. You'll be able to change the transparency of a given layer, making it easier to apply brush strokes and touch-ups to the photo underneath. Transparency also works great as digital tracing paper. Layers can be merged during a project, allowing all of your changes to become one cohesive picture. You can also import different photos on different layers, allowing you to mesh multiple photos into one to create a new photo all-together.

You'll get access to a slew of brushes and pen strokes but it probably won't be nearly as many as Sketchbook Pro has. Keep in mind that Photoshop Touch is just that, a tool for editing photos, so there really isn't any need for a mass of brush types- Adobe is notorious for releasing add-ons to their products so we might get to see some new tools and additions in the future. The true genius of Photoshop Touch comes in the "levels" associated with it.

Levels give users the ability to alter the brightness and contrast of a photo, however, Photoshop Touch for iOS gives you a much broader range of levels to play with. You can apply a variety of different filters, lighting tints, and even mess with color strengths in a photo. There are also filters to reduce red-eye and adjust focus. If you're feeling especially nostalgic you can add a sepia tone to your work or turn your photo black-and-white.

It isn't just the tools that make Adobe Photoshop Touch for iOS an amazing application either. The community and sharing options are worth the $9.99 all on their own. You can quickly save your PSD files to a specialized gallery, allowing you to stop working on something and continue from where you were at a later date. You can also open your file on a different device or in the original Adobe Photoshop for PC and MAC. If you're finished with a project you can save it to your photo-roll, or quickly send it to friends via Facebook, Twitter, and Email. You also get access to the Photoshop Touch community.

Adobe has taken the initiative on making sure that anyone and everyone can use Photoshop Touch regardless of their skill level and familiarity with the program. There are a wide variety of free tutorial videos and tests that can be accessed from within the application. These tutorials are easy to understand and follow and will not only explain how to complete specific tasks but will also explain the different terminologies that are used throughout the application. There are also forums full of helpful users that can give you tips and tricks and help answer your questions.

If you're interested in manipulating and meshing photographs then look no further than Adobe Photoshop Touch. The price for this application is well worth all of the goodies you are getting and even though it cannot do as much as its powerful counterpart, it still packs a pretty big punch.

360 Panorama for painting on iPad

The iPad already comes equipped with an impressive Al I 5-Megapncel rear-facing HD camera. This is great for taking photographs, but what if you're a photographer that wants a little more "panoramic view" in your life?

360 Panorama can help you take full panoramic and 360-degree photos with incredibly simplicity. This brain-child from Occipital works by taking multiple photos, in one swoop, and then meshing them all together automatically. All you do is hold your iPad up and being by touching the start button within the application. From there you simply hold the iPad steady and turn in a clockwise or counter-clockwise motion. 360 Panorama will snap a photo each time it comes to the end of another photo. So, for example, if you take a photo of a mountain range and then turn clockwise, as soon as the application detects the "end point" of the original photo it takes another. Once you are done with your panorama you can hit the "start" button again to stop taking photos.

The application will then compile all of the photos you took and seamlessly bind them together to make one massive (and amazing looking) panoramic shot. It can be viewed in a 360-degree motion with the swipe of a finger on the iPad HD, but once it is uploaded to another source it can be viewed in a traditional panoramic style (which looks like one long photo). Thu can quickly share it via Twitter, Facebook, or Email, and you can even export it to your photo-roll.

Like Adobe, Occipital designed a specialized community around their application. The included website will give you free cloud storage (in addition to the iCloud you already have) to store your taken photos. You'll even get a free "touch- up" service that enhances the lighting and appearance of your photos automatically when you save them to Occipital's servers. The website also encourages sharing and socializing, giving users a platform to display their photos to one another.