Though there is another 3 to 4 months of time for the Microsoft Windows 8 to come into market, but this isn't keeping away the manufacturers from releasing new products which are desired to meet the new Windows 8 operating system. 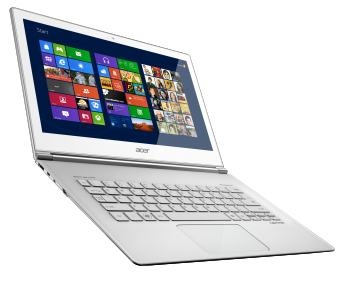 One of the best feature of Aspire S7 Ultrabook is that both the Ultrabooks are going to come with an aluminum unibody design and the keyboard is going to come with backlight which has the ability to automatically adjust based on the outside light conditions. Another significant feature is that the screen can fold back 180 degrees which allows the system to lay flat on the surface.

As of now details related to price and other features are not yet revealed but Acer announced that the price and other specifications will be released shortly in a separate announcement.

Comparison between Aspire S7 Ultrabook with its previous versions(S3 and S5 model):

There are some common features in the latest S7 Ultrabook which are similar to its previous models i.e., S5 and S3 like the chassis and bottom are made up of same metal and plastic and more or less have the same layout as of the previous versions. One significant change is that in the latest version the click pad was much easy to operate and press when compared to its previous versions.

The backlit keys in the latest version are completely made up of metal from top to bottom and have the ability to adjust with its surrounding light.

The previous versions have some defects like they used to get heated up very quickly, in order to overcome this problem Acer has come up with twin air cooling system which has efficient cooling system and can resolve the most common problem faced by many users in S3 model.

If you're looking for good Ultrabook that supports the upcoming Windows 8 operating system then I would recommend one to take Acer Aspire S7 Ultrabook as it has got many significant features like good battery backup, very thin and easy to carry, efficient to tilt 180 degrees and good touch screen that aptly suits Windows 8 and also has overcame many problems faced by S3 and S5 models.

In Computex, Acer announced its brand new series Aspire S7 Windows 8 computers. It will be the first touchscreen Windows 8 computer. With innovations in the hardware components and imbibing Windows 8 as its operating system Acer is on its way to success. This article covers the specifications, features,price and launch date of Acer Aspire S7 Series